Denver, CO – On Wednesday, August 19, Crooked Stave Artisan Beer Project will complete its 2015 line of Petite Sours with the release of Petite Sour Pure Guava. The release will take place at the brewery’s taproom (3350 Brighton Blvd) at 6:00 p.m. MST. 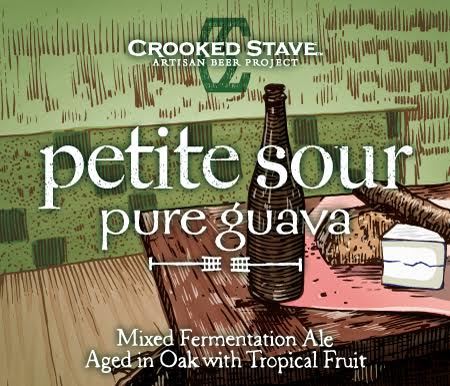 Crooked Stave first released Petite Sour Pure Guava in May 2011 in a large format 750ml bottle. This was the first bottled beer to be commercially available from the brewery.

“The original Pure Guava was a funky beer which has shaped the face of brewing for many brewers across the US,” said Chad Yakobson, Crooked Stave Owner / Head Brewer. “We decided to revisit this beer, using our current Petite Sour recipe, but instead of adding lacto to the wort pre-yeast, we used our house sour mixed culture to do 100% of the fermentation. The result is a much more complex Petite Sour with strong notes of tropical fruit and a pleasing tartness.”

Petite Sour Pure Guava (5.5% ABV), the eighth and final release in Crooked Stave’s line-up of Petite Sours, was primary fermented in oak with the brewery’s mixed culture of wild yeast and bacteria.

“Mixed culture primary fermentation allows for all of the organisms to complete fermentation through natural processes and produces flavors that are unmatchable,” said Yakobson. “We then leave these organisms present to continue to age and evolve with the beer. No quick short cuts, just natural fermentation.”

About Crooked Stave Artisan Beer Project
Crooked Stave is the culmination of “Founder and Brettanomyces Guru” Chad Yakobson’s open source Master’s research, The Brettanomyces Project. Crooked Stave’s progressive approach to brewing blends science and art through creativity and passion. The artistic creations, all of which use Brettanomyces yeast and mature in oak, result in beers of extraordinary complexity.