(COOPERSTOWN, NY) While in Westeros it remains very much uncertain who will ultimately rule the Seven Kingdoms, fans of Brewery Ommegang and the hit HBO show Game of Thrones are going to enjoy something not seen since the merry rule of King Joffrey – Iron Throne Blonde Ale and Take the Black Stout. The two first brews in the collaboration series, much like Jorah Mormont, are back just when fans thought they were gone forever. Both beers will be re-released this fall on draft, in single 750ml bottles and in a first-ever collectible gift pack featuring a bottle of each and a commemorative Game of Thrones glass. 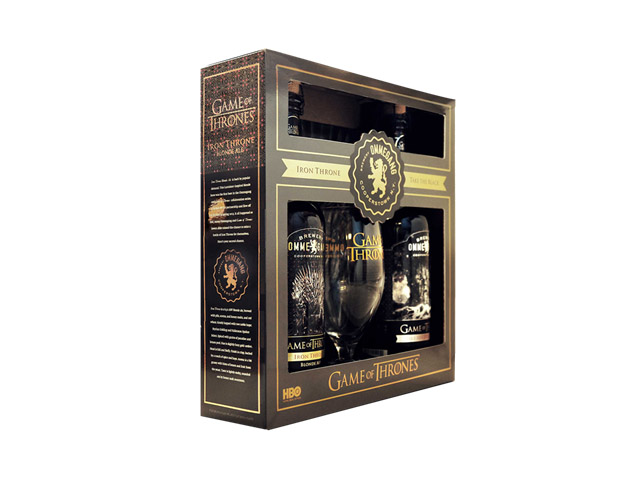 “We heard from so many fans who were disappointed about missing the first two Game of Thrones beers,” said Josh Goodstadt, Vice President of Global Licensing at HBO. “The popularity of the beers has grown right alongside the popularity of the show, and we are thrilled to give these first two brews a second turn in the spotlight.”

When it was originally released in 2013, Iron Throne Blonde Ale was brewed at only 25% of the volume of the most recent beer, Three-Eyed Raven, which hit stores this spring timed to Season 5 of the show. Bottle shops across the country sold out in days, while bars poured through kegs in hours. Take the Black Stout was brewed at twice the volume of Iron Throne and still sold out quickly. Fans who missed out on both of these popular brews, and those who can’t wait to try them again, will finally have a chance this fall.

“We had no idea what the reaction to a Game of Thrones beer would be when this all started,” said Bill Wetmore, Marketing Director for Brewery Ommegang. “We were blown away by the runaway success of these first two beers and are very excited to give loyal fans another chance to enjoy them.”

Iron Throne Blonde Ale has a slightly hazy golden amber hue. The head is full and fluffy. The finish is crisp, backed by a touch of spice and hops. The aroma is a bit grassy with a hint of lemon fruitiness from the lemon peel. The taste is lightly malty, rounded by honey malt sweetness. Iron Throne Blonde Ale is 6.5% ABV.

The two beers will be available nationally in late September on draft, in 750ml bottles, and also in limited edition gift packs featuring a bottle of each beer plus a newly designed glass featuring the Ommegang and Game of Thrones logos in gold. Suggested retail price for the individual bottles is $9.99 and $22.99 for the gift pack.

Brewery Ommegang, part of the legendary Belgian brewery Duvel Moortgat, opened in 1997 to craft-brew fine Belgian-style ales. Ommegang brews eight ales year-round, as well as an extensive and imaginative range of seasonal and specialty ales. The beers have won a national following by connoisseurs of fine beer and are distributed in 43 states and internationally. Ommegang is located on a 136-acre farmstead in Cooperstown, New York, USA and offers free daily tours and inexpensive tastings as well as a 100-seat café, a well-stocked brewery store, and an annual calendar of public events. Ommegang is open every day of the year except for Thanksgiving Day, Christmas Day, and New Year’s Day. For more information, please contact [email protected], call 1-800-544-1809, or visit www.ommegang.com. Follow Ommegang on Facebook: www.facebook.com/ommegang, Twitter: @BreweryOmmegang, and Instagram: @BreweryOmmegang

HBO Global Licensing officially licenses the HBO® brand for the development and merchandising of innovative product lines inspired by the network’s award-winning programming. With products created around hit series like Game of Thrones® and True Blood® as well as classic series like The Sopranos®, Sex and the City®, and Entourage, items include fashion apparel, figures, jewelry, digital and CD soundtracks, prop and costume replicas, games, books, and beverages, as well as exclusive, premium collections in partnership with upscale, designer brands. Merchandise can be purchased in retail stores nationwide, at http://store.hbo.com, and at the groundbreaking HBO retail hub, the HBO Shop®, located at 42nd and 6th Avenue in New York City. HBO Global Licensing products are also sold internationally across Europe (www.hboshopeu.com), Asia and Australia.