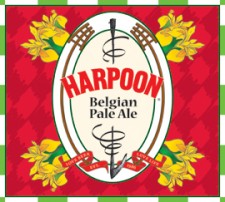 Harpoon Belgian Pale Ale has the spicy yeast characteristics of traditional Belgian beers along with an exceptional hop aroma and flavor.

The traditional Belgian yeast used for fermentation produces fruity, slightly spicy aromatics. A blend of Pale, Caramel, and Munich malts creates a golden amber hue with malty, sweet notes up front. A generous addition of Amarillo hops delivers a floral, citrusy hop character throughout and Apollo hops lend a hint of bitterness to the finish.

Belgian Pales consume the Belgian brewing scene, and were initially brewed around World War II to compete with Pilsners. They are traditionally less bitter than regular Pale Ales. They have a color range from pale yellow straw to amber hues. Flavors can vary although most have a natural spice flavor coming from yeast and hops. A recent trend for this style has been a hoppier version, popular in the United States.

Harpoon’s Belgian Pale Ale was first brewed for a Belgian beer festival in Boston several years ago. They have been working on variations ever since and are proud to unveil this beer to all of their fans.

Harpoon Belgian Pale Ale is a fusion of Belgian and American brewing styles.