The Harpoon Brewery Celebrates 25 Years of Its Winter Warmer 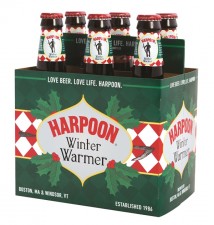 Boston, MA – As the days grow colder and the nights longer, winter is just around the corner. At this time of year, occasions are marked with traditional seasonal food and beverage. In keeping with one such tradition, many beer lovers enjoy seasonal spiced ale to warm up the chilly nights. One of the first seasonal beers in the country, returning for its 25th year, Harpoon Winter Warmer continues to be a favorite winter tradition on those cold New England days.

This classic winter seasonal is malty and robust. The characteristic cinnamon and nutmeg dominate the beloved aroma, but are subtle on the palate. The taste is a rich combination of the holiday spices and the hearty malt backbone. There is a mild sweetness to the finish along with the lingering flavor of the spices.

Winter Warmer was Harpoon’s first seasonal beer and one of the first seasonal beers to be offered in the country. Available from late October through December, Winter Warmer complements any holiday gathering. Whether enjoying a pint with friends in a cozy pub or serving it at a large family get-together, this spiced ale adds to every winter occasion. Harpoon Winter Warmer is available in six-packs, twelve-packs, and on draft.

About The Harpoon Brewery:
The Harpoon Brewery was founded by beer lovers, Rich Doyle and Dan Kenary.  In 1986 Harpoon was issued Brewing Permit #001 by the Commonwealth of Massachusetts, since it was the first brewery to brew commercially in Boston after a dormant period of about 25 years.  Harpoon’s line of craft beer features its award winning IPA and UFO Hefeweizen beers, along with four special seasonal selections. In 2000 Harpoon purchased a second brewery in Windsor, VT, making Harpoon the 9th largest craft brewer in the US.  Harpoon has since introduced the limited batch 100 Barrel Series and the as well as the all-natural Harpoon Cider made from freshly pressed, local apples.