(NASHVILLE, TN)  – In honor of the 2018 Craft Brewers Conference, Fat Bottom Brewing is partnering with industry-leading breweries and suppliers to host Collaboration Nation, a collective brewing effort that will feature limited-edition beers from each participating brewery, created specifically for Collaboration Nation . 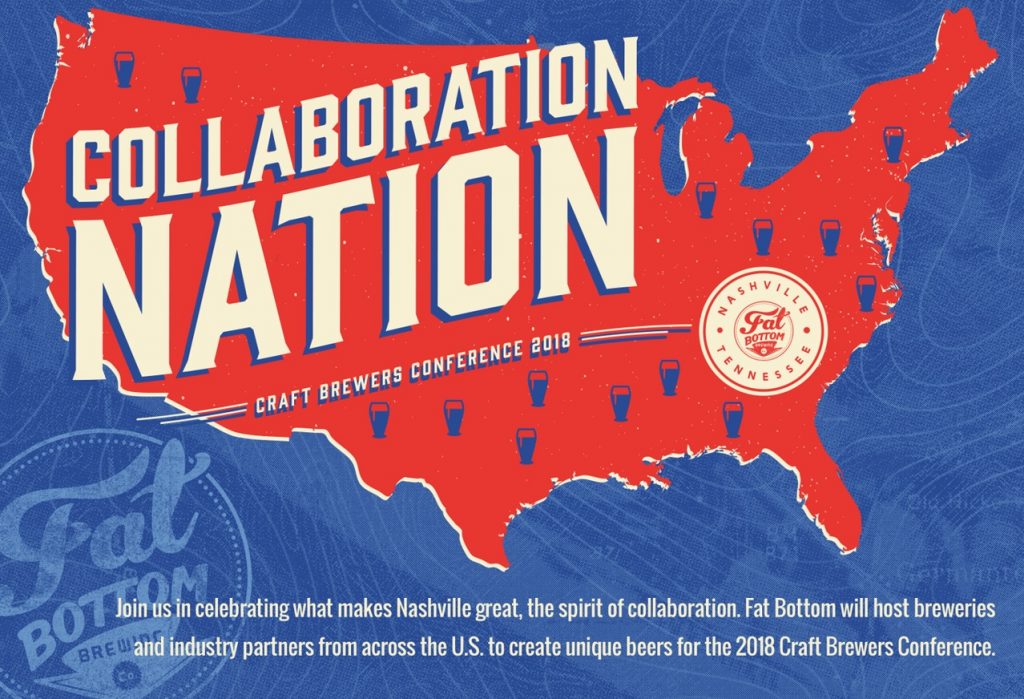 This annual exclusive release project intends to continue the industry spirit of camaraderie and collaboration by using beer as a medium for impacting positive change in our communities. Each specialty brew will be crafted by the participating breweries and Fat Bottom’s brewing team with the tools and resources provided by the participating suppliers. The beers will be served at Fat Bottom’s taproom and key accounts across Nashville throughout the conference, with a portion of the proceeds being donated to a charity of each brewery’s choice.

Keeping true to the essence of collaboration that inspired this unique partnership, Fat Bottom Brewing will be hosting multiple “Brewers Days” leading up to the conference, where participating brew masters and suppliers will meet at the Fat Bottom brewery to discuss and create their unique brews. These Brewers Days will facilitate new industry friendships and continue to strengthen the culture of sharing knowledge, ideas and quality throughout the industry.

“I fell in love with the craft beer industry for a few specific reasons: the fact that you never know everything about your craft, the abundance of benevolence and damn good beer. Only with the help of all the amazing people involved are we able to celebrate all of those aspects in one project,” says Drew Yeager, Brewmaster at Fat Bottom Brewing.

The 2018 Collaboration Nation is made possible by the talented people at each of the following companies:

The conference-long initiative will be kicked off with a May 1st release party at The Cambria, a hotel and restaurant inspired by the style, sound and Southern hospitality of Tennessee, located just steps from the Nashville Convention Center. This event will be open to both badgeholders and the public, and representatives from each brewery will be on site to discuss the process.

Since its opening in 2012, Nashville-based Fat Bottom Brewing set out to make beers that are bigger and more flavorful than what one can find his or her local bar. Its mission was to provide brews with a universal appeal, based on a wide variety of styles from around the world. In the beginning of 2017, Fat Bottom moved to a new, state-of-the-art, 33,000 square-foot facility that allowed it to create at a higher capacity than ever before, bringing the market even more beer full of flavor and personality, without skimping on consistency and quality. For more details on Fat Bottom, visit  www.fatbottombrewing.com.