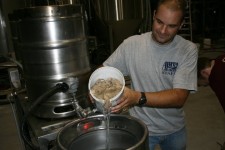 Brew made with real Louisiana Oysters

Abita is proud to introduce their newest Select brew, made with real Louisiana oysters. Last year the Abita Brewing Company sponsored a home brew competition and offered the winning brewer a unique prize, a chance for their beer to be brewed by Abita and distributed as an Abita Select offering. The winning home brewer is Kerry Dale Yoes of Zachary, with Imperial Louisiana Oyster Stout. Home brewers from around the region gathered in March of last year at the Abita Brewery to compete. Yoes’ beer was the judges’ favorite and earned him the “Andy Award.” The award was named in honor of Abita’s first home brew contest winner, Andy Thomas who created the base recipe for Abita Andygator many years ago.

“We are especially pleased to offer this new Select because it contains real Louisiana oysters,” said David Blossman, President of Abita Beer. “We want the world to know that seafood fresh from Louisiana is ready and waiting for them to enjoy in so many ways…including as an ingredient in craft beer. Using Louisiana ingredients in our brews, from strawberries and satsumas to pecans and oysters, is just another way Abita Beer keeps their promise to always stay Louisiana True.”

Abita’s Imperial Louisiana Oyster Stout is made with pale, caramel, roasted and chocolate malts. Oats are also added to give the beer a fuller and sweeter taste. The roasted malts give the beer its dark color, as well as its intense flavor and aroma. The flavors of toffee and chocolate are prevalent but not overpowering. The beer is hopped with Willamette hops. Since the beer gets so much flavor from the malts there is not a lot of hop flavor. There is just enough bitterness to complement the sweetness of the malt. Finally, freshly shucked Louisiana oysters are added to the boil. The salt from the oysters gives the beer a more intense aroma and mouthfeel.

Abita Select is an exclusive premium draft product line from Abita that features a new style every few months. These specialty brews can be found only on tap and only at certain restaurants and bars. Consumers can locate Abita Select by using the beer finder on the Abita website or downloading the free Abita iPhone app.

About the Abita Brewing Company