(Poncha Springs, Colorado) – Starting this April, Elevation Beer Company will be making a change to 12oz bottle 6-packs across Colorado for their Blue and Green Series’ of beers. 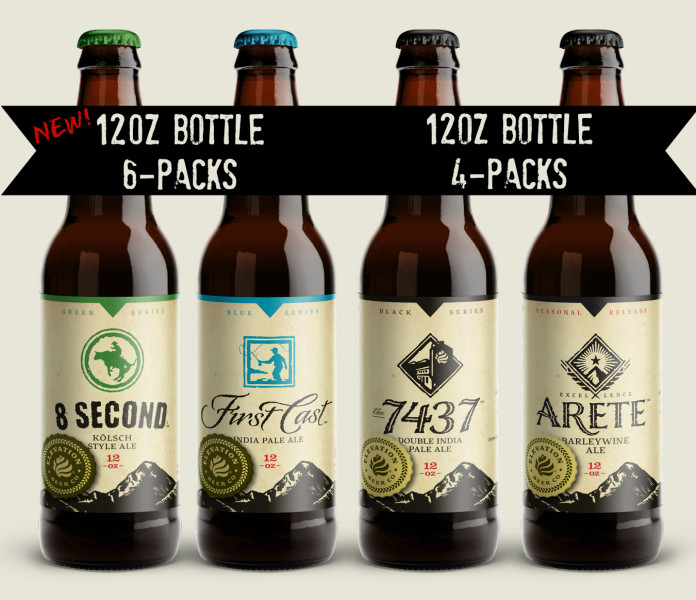 “We are excited to announce the switch from our 500ml 4-packs to traditional 12oz bottle 6-Packs,” Says Elevation Marketing Director and Co-Founder Sheila Bustamante, “The new packaging will provide a more approachable package for retailers and craft beer fans.”

The change also allows Elevation to start using 100% Colorado-made bottles and to drastically reduce their carbon footprint, as the previous 500ml bottles were made in Germany.

Elevation will start selling its 8 Second Kölsch, First Cast IPA, and Little Mo’ Porter in 6-packs starting in April, with beers like their Apis IV Belgian Honey Quad, 7437 Double IPA, and other Black Series seasonals coming to 12oz bottle 4-packs in mid-May. Elevation will still be keeping their Double Black Series of barrel-aged beers in their traditional 750ml corked and caged format.

“It will be the same great beer, but in a friendlier package, both to our fans and to the environment,” Sheila exclaims.

About Elevation
Elevation Beer Co. is an artisan microbrewery located in Poncha Springs, Colorado, just minutes from Salida, Monarch Ski Area, Arkansas River Headwaters, and over seven 14,000-foot peaks. Elevation specializes in brewing large adventurous beers for the craft beer fanatic, while trying to elevate the perception of what beer can be.