Boulder, CO – Timed to coincide with Colorado Craft Beer Week, Twisted Pine Brewing will release West Bound Braggot on Thursday, March 26th. This will mark the beer’s first appearance in bottles since 2012 when it won a gold medal at the Great American Beer Festival. 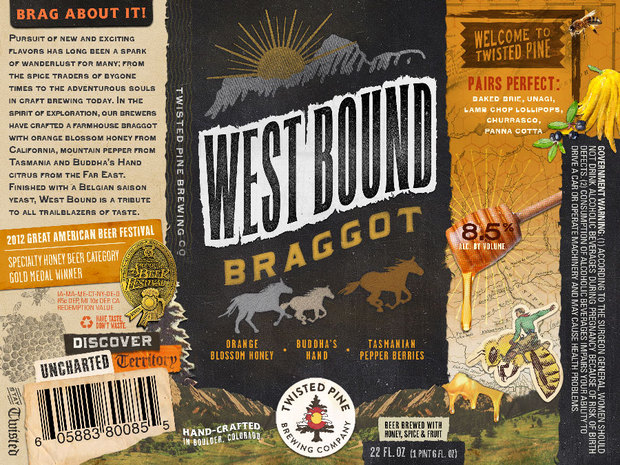 With two GABF medals now under its belt, West Bound Braggot has made a few small batch appearances on draft at the Twisted Pine ale house since its debut as part of the brewery’s 2012 Artisan Ale Series, but has not been bottled since that initial batch. The beer now returns to glass as a 22 ounce bomber offering, dressed in a newly designed label by Boulder-based Anthem Branding.

“West Bound is such a beautiful and unique beer” states Justin Tilotta, Sales & Marketing Coordinator for Twisted Pine, “and one that we take great pride in.”

“It also happens to be one of the beers we get asked about most frequently,” Tilotta adds, “so we’ve decided to finally make it part of our regular seasonal rotation and release it once a year just as spring really kicks off.”

“With alcohol strength (8.5% alcohol by volume) suitable for any sporadic spring snows and a light, bright body and flavor that pairs perfectly with a sundrenched patio session, the timing of the release seems ideal.”

West Bound is brewed with a combination of malted barley and wheat plus orange blossom honey. This is where braggot traditions end as Twisted Pine’s brewers then add Citra hops, Tasmanian pepper berries and Buddha’s Hand citrus to the kettle before fermenting the beer with a farmhouse yeast strain.

After the beer’s release at Twisted Pine on Thursday, 22oz bottles and kegs will be made available to select accounts within the brewery’s distribution footprint the following week.

Based in Boulder, Colorado, Twisted Pine Brewing Company has been hand-crafting quality ales since 1995. In addition to such favorites as Hop Zealot, La Petite Saison and Billy’s Chilies, the brewery has repeatedly pushed the boundaries of style guidelines with such creations as Big Shot Espresso Stout, Northstar Imperial Porter and Ghost Face Killah. Twisted Pine is actively involved with local charitable organizations and is a staunch advocate of sustainable business practices.