(Hood River, OR) – Double Mountain Brewery & Taproom’s Cluster Single-Hop IPA hits the market in reusable half-liter bottles available in limited quantities in Oregon, Washington, California, and the Vancouver, B.C. area. This hop-forward beer will be available on draft as soon as June 12th, 2014 and can be found on retailer shelves after June 15th, 2014. It is currently available at the Double Mountain Taproom in Hood River, OR. 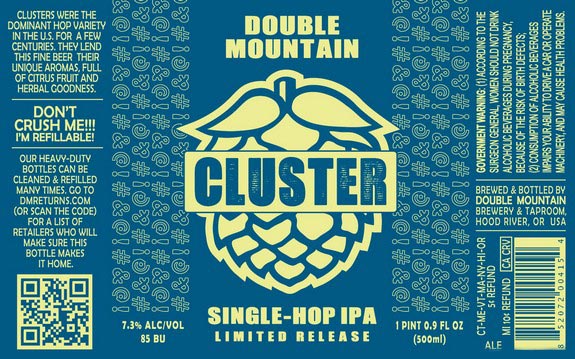 Double Mountain has been ringing in the summer with this bold hopped IPA every June since 2011. Cluster hops were the dominant hop in the US brewing industry for centuries, and the forerunner of many modern Northwest hop varieties. They have a distinctive citrus aroma and strong herbal notes. The Cluster recipe features Clusters in the kettle, in the hop back, and chiefly in the fermenter for dry-hopping. Pilsner and honey malts are used to form the baseline add harmony to this bight, yet hoppy IPA. 6.6% ABV, 75 BU

Brewer Matt Coughlin excitedly describes the 2014 batch of the Cluster IPA, “This year’s Cluster has a sunny glow, and it dried out really well. It’s cluckful of flusters, and with the dryness the hop aroma really pops.”