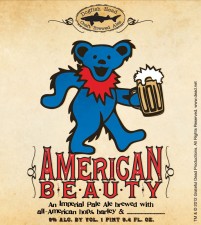 Dogfish Head Craft Brewery and Grateful Dead, two pioneers who built their followings by connecting directly with beer lovers and music lovers, are collaborating on the newest beer in Dogfish’s line of off-centered ales.

Working in that happy place between creative ideas and like-minded people, the off-centered brewery and free-spirited band have been trading ideas for a beer they’re calling “American Beauty.” They’ve settled on a strong pale ale with all-American hops and barley, and now they’re asking their loyal fans to suggest a special ingredient – and the Dead-inspired story behind it.

“Grateful Dead Productions is extremely pleased to be partnering with Dogfish Head Craft Brewery on the American Beauty pale ale. We’ve looked for a long while for the perfect brewery to team up with for a Grateful Dead-inspired brew, and feel we’ve finally found the right fit. Aside from Dogfish’s history with music-themed brews, we love their beer, and think it’s the best around. Plus, these are really good people and are the type of folks we want to work with,” says David Lemieux, legacy manager for Grateful Dead.

“The feedback the band got from Dead Heads was always an important factor in their shows,” says Dogfish Founder and President Sam Calagione. “And at Dogfish, we’ve always thought of our pub regulars and brewery tour guests as an informal focus group, so we’re sending a shout out to all those Dead Heads and Dogfish Heads by making them a driving force behind this beer.”

Did you trade a bushel of fresh clementines for tickets to a two-night-stand at Long Beach Arena? Or maybe your dad first laid eyes on your mom sipping a cup of green tea in the parking lot of the legendary Cornell ‘77 show? Jog your memory, tell the story, and suggest the ingredient at the heart of that story. You could help bring this counterculture collaboration to life.

Suggestions for American Beauty’s final ingredient will be taken online in December. A panel from the Dogfish Head and Grateful Dead teams will pick the ingredient they feel works best in the context of a strong pale ale recipe. The brewery and band hope to invite the fan who suggested the ingredient to Dogfish’s coastal Delaware brewpub in the spring of 2013 to help brew a test batch.

“My wife, Mariah, and I went to our first Dead show together in the summer of ‘91,” says Calagione, “and I’ve been listening to Workingman’s Dead and Shakedown Street, two of the earliest albums I ever owned, on my morning kayak trips. It’s amazing how timeless those albums are.”

American Beauty is expected to hit taps and shelves throughout Dogfish’s 27-state distribution network in October 2013. Stay tuned to www.dogfish.com for details on how to be a part of this grassroots brew.