(Bend, Oregon) –  Deschutes Brewery’s winter seasonal, Jubelale, will start showing up on shelves and tap handles next month to help herald in the cooler days of fall. Inside the bottle, fans will find the warm spiciness, dried fruit and a hoppy finish they’ve come to love. Outside the bottle, this year’s packaging features a detailed illustration by artist Taylor Rose featuring a wintery hiking scene along a trout-filled riverbank. 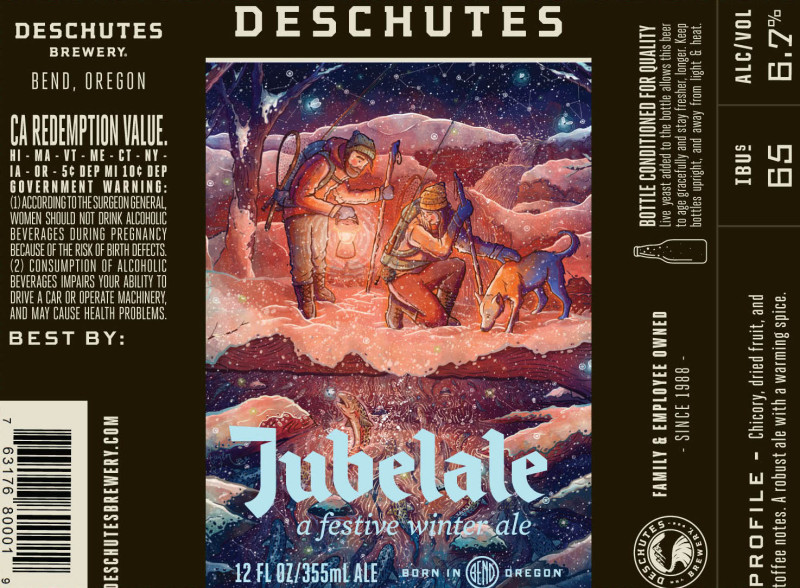 Taylor said, “I wanted this illustration to be all about the beauty of adventuring on a cold snowy night. It’s called ‘First Tracks First Cast’ because there’s nothing more special than fresh snow, cold waters, and good company. I’m so honored to be amongst such a fantastic family of Jubelale artists.”

Taylor Rose, who is now based in Bend Oregon, grew up in a small New Hampshire town and spent a childhood immersed in the nature that now inspires her art. In her work, she is constantly rediscovering her inner child to portray a world that beautifies nature and embraces the imagination process. The 2015 Jubelale artwork is no exception. A detailed portrayal of a couple and their dog walking along a snow covered trail, peering into a trout-filled river, captures the beauty and wonderment that the outdoors offer anytime of the year.

She continued, “To create this piece I used a process of ‘pencil, ink, watercolor, digital.’ Everything starts with a pencil drawing, is then inked with a calligraphy brush, and lastly scanned into the computer to be painted digitally with high resolution scans of watercolor brushes/markings.”

The release of this year’s Jubelale will be celebrated in Bend at the brewery’s downtown pub at 1044 NW Bond Street on Monday, September 28th. Taylor Rose will be attending the event to sign posters from 5-8 p.m.

This year marks the 28th bottling of Jubelale, the first beer that Deschutes Brewery ever bottled. For the last 21 years, a different local artist has been chosen to create an original piece of art for the label. This “winter warmer” is always a favorite for the holiday season. Jubelale will be available everywhere Deschutes Brewery beer is sold, starting in September.  6.7% Alcohol by Volume (ABV); 60 International Bitterness Units (IBUs); 12-ounce bottles and draft.

Named as OUTSIDE’s Best Places to Work in both 2013 and 2014, Deschutes Brewery was founded in 1988 as a brew pub in Bend, Oregon. Still family and employee owned 27 years later, the brewery is known for brewing a diverse line-up of award winning beers including the popular Black Butte Porter and Mirror Pond Pale Ale. From the beginning, the focus has been on crafting the best beer and food using only the finest ingredients.  In 2008, the brewery opened a second pub in Portland’s Pearl District. Deschutes Brewery now ships beer to 28 states, the District of Columbia, and around the world from its main brewing facility located on the banks of the Deschutes River.  To find out more, visit www.DeschutesBrewery.com.