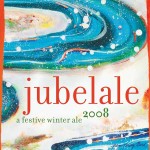 Each year the brewery commissions a different Central Oregon artist to capture the essence of this winter seasonal beer. Pam Jersey Bird, based in Sisters, Oregon, created the resist-style painting that will grace this year’s packaging, available exclusively for the holidays from October through December.

“Because Jubelale is ‘A Festive Winter Ale,’ I wanted to portray a scene that was lively and colorful but also captured Central Oregon’s snowy climate,” says Bird. “I decided to focus on the river that is the namesake of the brewery and also inspired the name of our town. Emphasizing the curve of the bank, I added snowflakes and ice crystals, which surround the blue moving waters of the Deschutes River.”

Jubelale is made with dark crystal malt and whole flower hops that provide a rich flavor perfectly matched for the cold weather and hearty foods of winter. The team at Deschutes recommends pairing Jubelale with strong flavored foods like roasted beef, root vegetables and pumpkin pie. Being the first beer ever bottled by Deschutes Brewery, 2008 marks the 21st version of this award-winning, seasonal favorite.

“Jublelale is one of our most anticipated releases of the year,” says Deschutes Brewery Founder and President, Gary Fish. “The beer is always amazing, but part of the appeal is seeing the new label for the first time each year – it’s like unwrapping your first holiday gift of the season.”

Jubelale is one of four seasonal beers produced by Bend’s Deschutes Brewery, and is available in 6-packs, 12-packs and on draft in 12 Western States beginning in October. MSRP is $7.99 for 6-packs and $14.99 for 12-packs.