(Boston, MA/Bend, OR)   – This October, Harpoon and Deschutes will release a collaboration called EHOP – beers brewed by employee-owners in celebration of brewing independence. The story began, in part, in August 2014 when the Harpoon Brewery announced that it was transitioning to employee ownership. When the news broke, employee-owners from Deschutes Brewery were among the first to extend an enthusiastic welcome to the ESOP (Employee Stock Ownership Plan) club. 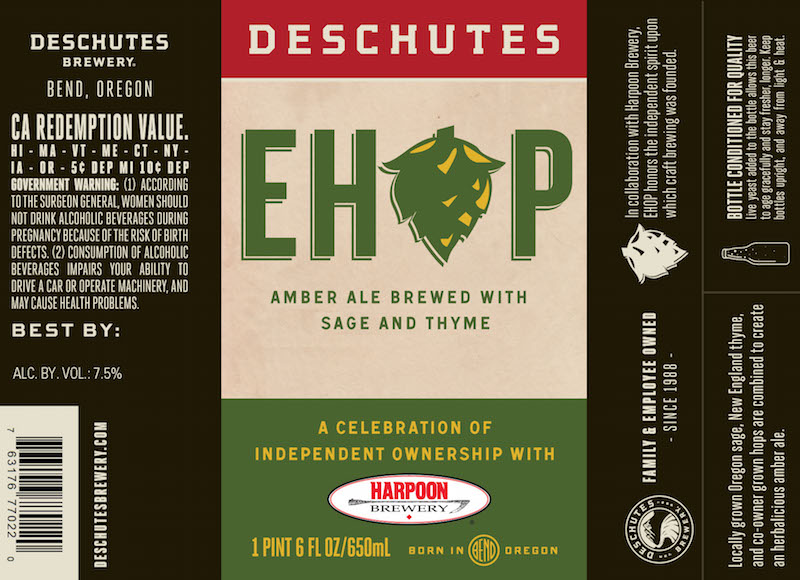 Two versions of the EHOP beer will be released: one brewed at Harpoon in Boston and the other brewed at Deschutes in Bend, Oregon. Harpoon brewer Ethan Elston and Deschutes brewer Ryan Schmiege collaborated on both recipes. While each beer is unique, both recipes include employee-grown hops (EHOPs) and local ingredients. 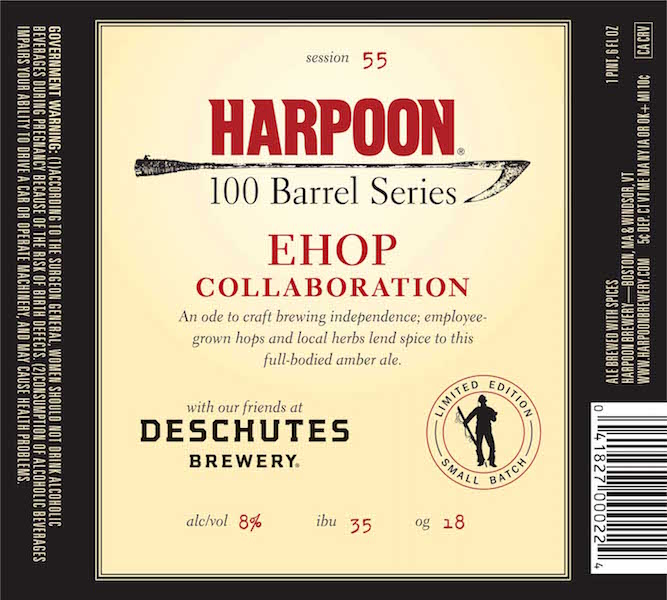 The Harpoon EHOP will be released as part of the brewery’s limited batch 100 Barrel Series. Harpoon employees contributed their homegrown hops to the recipe, which include Cascade, Challenger, Willamette, and Tettnang hop varieties. The combination of Caramel and Midnight Wheat malt gives this beer a sturdy malt character, while locally sourced sage and thyme add a bit of spice. The result is a full-bodied amber ale with a malty sweetness and lingering spiciness. ABV 8% / IBUs 35.

“It has been quite a year for us at Harpoon as we’ve transitioned to employee ownership,” says Harpoon CEO and co-founder Dan Kenary. “It’s a complicated process and we couldn’t have done it without the support that we received from Deschutes and other craft brewers who had chosen this path before us. We’re extremely proud to be employee-owned – being an independent brewer is something we value deeply and believe it’s at the core of what makes the craft beer industry so great for both brewers and beer lovers. This beer is a high-five to our fellow independent American craft breweries and their employee-owners.”

Deschutes is brewing its version of the EHOP beer using the same malt and hop profile. Several of the whole flower hops being used in the beer are growing in front of the brewery’s main Bend, Oregon facility, and were harvested by employees this week to add to the beer. This beer will also be an amber ale, brewed with Oregon sage and thyme. ABV 8% / IBUs 35.

Ryan Schmiege, assistant brewmaster for Deschutes, traveled to Boston to collaborate on the Harpoon EHOP. He said, “This is the perfect way to celebrate employee ownership for both of our breweries. I had a fantastic time working with the brewing team at Harpoon, and it was interesting to see how many similarities our two breweries have, even though we are across the country from one another. I’m proud that we’ve come together on this collaboration to celebrate our shared employee-ownership culture.”

Deschutes and Harpoon will host an invite-only EHOP release party on Thursday, September 24th from 3-6 pm at the Corner Office at the Curtis Hotel in Denver prior to the opening GABF session. The Harpoon EHOP will be on tap along with a selection of Deschutes beers. Fellow Colorado brewery employee-owners and their beers will be on hand at the celebration, including New Belgium, Odell, and Left Hand. Harpoon CEO Dan Kenary, Deschutes CEO Gary Fish, Odell CEO Wynne Odell, New Belgium Director of Organizational Development Jennifer Briggs, and Left Hand Co-Founder Eric Wallace will be at the reception celebrating employee ownership and sharing their great beers.

Named as OUTSIDE’s Best Places to Work in both 2013 and 2014, Deschutes Brewery was founded in 1988 as a brew pub in Bend, Oregon. Still family and employee owned 27 years later, the brewery is known for brewing a diverse line-up of award winning beers including the popular Black Butte Porter and Mirror Pond Pale Ale. From the beginning, the focus has been on crafting the best beer and food using only the finest ingredients.  In 2008, the brewery opened a second pub in Portland’s Pearl District. Deschutes Brewery now ships beer to 28 states, the District of Columbia, and around the world from its main brewing facility located on the banks of the Deschutes River.  To find out more, visit www.DeschutesBrewery.com

About the Harpoon Brewery:

The Harpoon Brewery was founded by beer lovers Dan Kenary, Rich Doyle, and George Ligeti.  In 1986 Harpoon was issued Brewing Permit #001 by the Commonwealth of Massachusetts, since it was the first brewery to brew commercially in Boston after a dormant period of about 25 years.  Harpoon’s line of craft beer features its award winning IPA and UFO White beers, along with special seasonal selections. In 2000 Harpoon purchased a second brewery in Windsor, VT, making Harpoon the 15th largest craft brewer in the US.  Harpoon has since introduced the limited batch 100 Barrel Series and the as well as the all-natural Harpoon Craft Cider made from freshly pressed apples.  In August 2014 Harpoon became an employee-owned company. For more information about Harpoon beers and visiting the breweries, visit www.harpoonbrewery.com.