(Dallas, Texas) – Deep Ellum Brewing Company announces the release of DTX Golden Ale, a light, refreshing, crisp new brew that pays tribute to the brewery’s hometown of Dallas, Texas. DTX Golden Ale (4.8% ABV, 15 IBUs) is now being distributed on draft and will soon be available in 6-packs of 12 oz. cans. 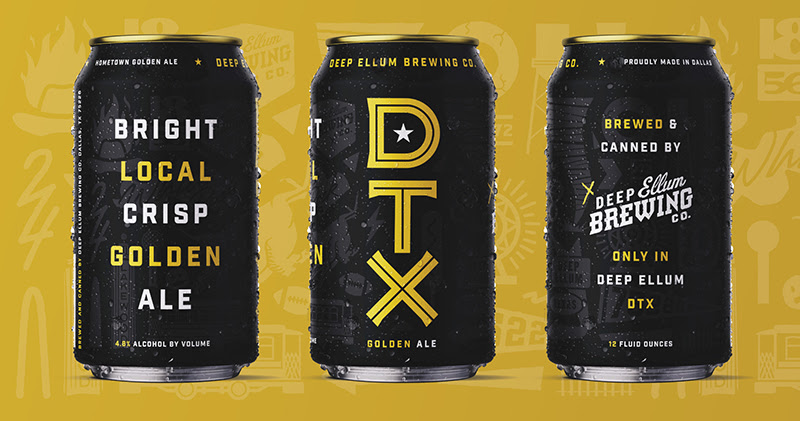 “DTX is a refreshing take on a golden ale,” said Deep Ellum’s Innovation Brewer, Brian Morris. “Simplicity, balance and approachability were the driving factors for designing this beer. DTX hosts a beautiful interplay of pilsner malt and delicate hop character.”

DTX is foil to the brewery’s well-known Dallas Blonde, which pokes fun at the city’s stereotypes – a joke rooted in affinity for the place. Deep Ellum believes that there is nothing better than a hometown brew: it’s the happy hour go-to, the one that makes you proud of where you live, the one that you consider getting inked at least twice, it’s at every house party and all of your out-of-town friends crave it. Thus, DTX Golden Ale is a taste of Dallas – a celebration of the city’s arts scene, music, colors and flavors, because it’s a great place to visit and an even better place to be from.

DTX Golden Ale will replace Deep Ellum Lager in the brewery’s year-round lineup. Try DTX Golden Ale at the original Deep Ellum Dallas Taproom or the Funkytown Fermatorium in Fort Worth now, or find it at a watering hole near you. Look for it in 6-packs of black-and-gold cans in Texas retailers soon. See the beerfinder for details or email Maegan Eason with questions at [email protected]

About Deep Ellum Brewing Company
In 2011, Deep Ellum Brewing Company set up shop in the Deep Ellum neighborhood of Dallas, Texas – the first craft brewery to open in Dallas in over a decade. Since then, Deep Ellum has become as well known for its innovative brewing and exceptional quality as it has for its healthy disdain for the status quo. Like the notorious neighborhood it calls home, the brewery is bold, fearless, and unapologetic. The idea of “blending in” was never part of the plan – at the bar or on the shelf. In 2019, Deep Ellum brought their uncommon flavors to Fort Worth with the opening of Funkytown Fermatorium. With a commitment to staying true to their reckless streak, their rough edges and their roots, Deep Ellum has quickly grown to become the 3rd largest independent craft brewery in Texas and the 65th largest brewery overall. Led by its flagships, Deep Ellum IPA and Dallas Blonde, the brewery has amassed an extremely devoted fan base across Texas and beyond.