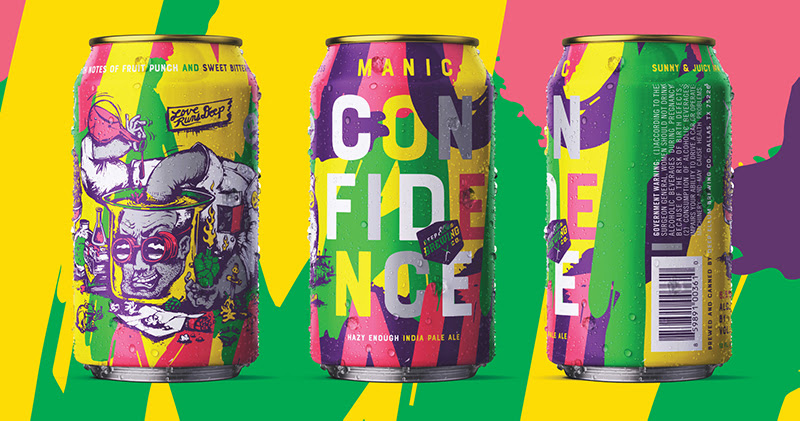 Manic Confidence is a hot tropical island vacation dissected and reconstructed in the form of a refreshingly juicy craft brew. The sunny, sweet bitterness of Galaxy, Enigma, Comet, Strata, Citra and Idaho 7 hops flood the taste receptors, resulting in a salivating joy that leaves you craving more.

Some may say that Deep Ellum is late to the hazy trend, but they consider themselves to be right on time, delivering a beer with a maniacal amount of hop flavor and complexity from six premium hops. At 6.5% ABV and 25 IBUs, it places a frenzy of flavor at the forefront, and it’s hazy enough to satisfy your craze for haze.

Deep Ellum’s Innovation Brewer, Brian Morris, said, “When building Manic Confidence we knew we had to go into it with two things in mind – embodying the mentality that has gotten us to where we’re at as a brewery, and using waaaaay more hops in a beer than we ever have. You can even see our manic nature as a brewery in the hops that we featured in this beer. Manic Confidence has an incredible tropical fruit profile of aromas and flavors including pineapple, mango, starburst candy and white gummy bear.”

About that mentality, Deep Ellum Marketing Manager Maegan Eason explained where the beer’s name originated: “In a brewery meeting, someone referred to the Deep Ellum brand as ‘cocky,’ and our Founder, John Reardon, said, ‘we’re not cocky. We’re manic confident.’”

Try Manic Confidence at the original Deep Ellum Dallas Taproom or the Funkytown Fermatorium in Fort Worth starting now, or find it on draft at a watering hole near you. Look for it in 6-packs of colorful cans starting March 1. See the beerfinder for details or email Maegan Eason with questions at [email protected]

About Deep Ellum Brewing Company
In 2011, Deep Ellum Brewing Company set up shop in the Deep Ellum neighborhood of Dallas, Texas – the first craft brewery to open in Dallas in over a decade. Since then, Deep Ellum has become as well known for its innovative brewing and exceptional quality as it has for its healthy disdain for the status quo. Like the notorious neighborhood it calls home, the brewery is bold, fearless, and unapologetic. The idea of “blending in” was never part of the plan – at the bar or on the shelf. In 2019, Deep Ellum brought their uncommon flavors to Fort Worth with the opening of Funkytown Fermatorium. With a commitment to staying true to their reckless streak, their rough edges and their roots, Deep Ellum has quickly grown to become the 3rd largest independent craft brewery in Texas and the 65th largest brewery overall. Led by its flagships, Deep Ellum IPA and Dallas Blonde, the brewery has amassed an extremely devoted fan base across Texas and beyond.