(ATHENS, GA) – Creature Comforts Brewing Company will debut a limited offering from its wood cellar, Golden Door, this November. Golden Door is a mixed fermentation saison aged in oak barrels that will be available in 750-mL bottles in the brewery’s Tasting Room. 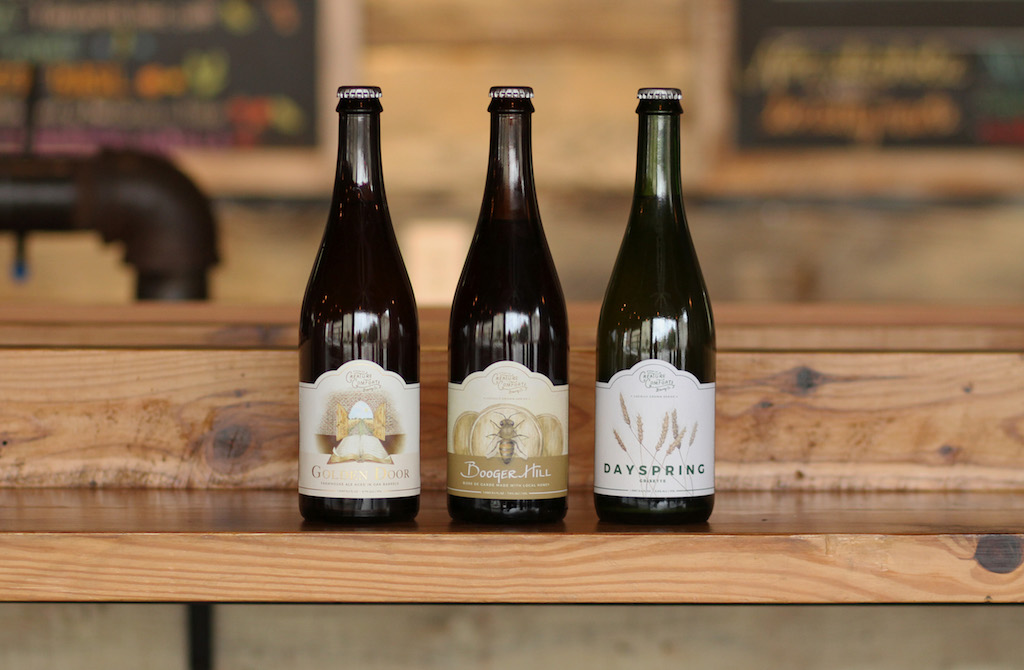 Golden Door is an expression of Creature Comforts’ house-mixed culture of yeast and bacteria – the backbone of the brewery’s barrel program – and time. The flavor of the beer is driven by its time aging in wood. The beer’s name is a nod to a quote by American botanist and inventor George Washington Carver that says, “education is the key to unlock the golden door of freedom.”

“As saisons were made for farmers and fieldworkers, we wanted to honor a person who made a difference in the agricultural community, especially in Georgia,” said Wood Cellar and Specialty Brand Manager Blake Tyers. “We take inspiration from the curious thinkers, inventors, artists, and explorers, and with saisons being so important to agriculture we picked out George Washington Carver and used a quote of his to name the beer.”

Golden Door was aged in oak barrels for one year and bottle conditioned. The beer was bottled April 2017 and is 6.7-percent ABV. The label was designed by local artist and Creature Comforts staff member Melissa Merrill. The original artwork was inspired by Carver’s quote the beer’s name references.
Golden Door will be available onsite at Creature Comforts on November 24.

Creature Comforts Brewing Company will release a barrel-aged biere de garde made with local honey, Booger Hill, in late November. The beer was packaged and conditioned in 750-mL bottles and will be released on-site at Creature Comforts.

The beer’s name is a nod to Booger Hill Bee Company, the Danielsville, GA-based farm from which the brewery sourced the honey used in the brew. Booger Hill fermented in oak barrels with the brewery’s house-mixed culture of yeast and bacteria and underwent 16 months of aging in the barrels.

Booger Hill is 7.8-percent ABV and presents a flavor and aroma of almonds and subtle cherry, balanced by a palate of medium acidity. The beer was bottled April 2016 and in September 2017 was disgorged – a technique commonly used when making sparkling wine.

“A tremendous amount of time and work went into this beer,” said Wood Cellar and Specialty Brand Manager Blake Tyers. “Each step along the way was challenging, a lot of labor, and a bit of loss too – making the finished product really special.”

Athens illustrator and Creature Comforts staff member Melissa Merrill, who has now designed several labels for the brewery, created the artwork for Booger Hill. Merrill painted the original artwork with a Booger Hill honey reduction and pollen from hop flowers.

Booger Hill will be released on-site at the brewery on November 24.

Creature Comforts Brewing Company will release DaySpring, a grisette made with local wheat, in late November. The beer will be available in 750-mL bottles to purchase onsite at the brewery.

Creature Comforts sourced the wheat used in the beer locally from DaySpring Farms (Danielsville, GA), for which the beer was named. The brewery used the local wheat in the 2015 release of DaySpring, in addition to other previous releases and collaborations.

“The first batch of DaySpring was the first time we sourced wheat from the Brett family, who run DaySpring Farms,” said Wood Cellar and Specialty Brand Manager Blake Tyers. “Since then we’ve become good friends and we’ve tried to use their grains in a few of our beers now. We feel like it has such a sense of place to where we are and it’s always great working with a local farm. Being able to do that again and make another beer with their name on it is a privilege, an honor, and an awesome way to be able to extend that friendship.”

Much of the flavor profile DaySpring presents is driven by the wheat, yeast, and traditional European hops used in the beer. DaySpring is dry and drinkable with a bit of pastoral funk, grassiness, black tea notes, and an herbal hop character. The beer was bottle conditioned and is 5.3-percent ABV.

DaySpring (2015) was released from Creature Comforts just a year after the brewery opened, and served as the first release from its Locally Grown Series. The series is used to showcase local ingredients sourced from farms in and surrounding the brewery’s community of Athens.

The 2017 release was bottled August 2017 in green 750-mL bottles. This is the first beer Creature Comforts has packaged in green bottles. The brewery chose green bottles in order to allow consumers to shape the flavor path of the beer and to have the ability to create an intentional light-struck character to the beer if desired.