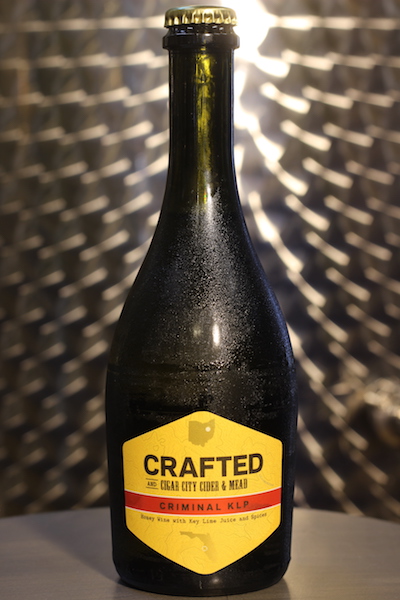 Jared Gilbert, head mead maker for Cigar City, flew to Akron to work alongside Kent Waldeck of Crafted and his team.  The recipe, a key lime pie inspired mead, was developed in the months leading up to the visit.  Aiming to replicate the graham cracker crust and lime notes the mead was infused with over 400lbs of graham cracker, pecan, lime zest and key lime juice.

“Working on a collaboration like this is simply just an awesome way to learn from each other while at the same time producing something that is out of this world great,” said Crafted Owner Kent Waldeck.  “The team at Cigar City is fantastic and we made some great friends along the way as well”, Waldeck continued.  Justin Clark, Co-Founder of Cigar City Cider and Mead added, “I had some Crafted meads before I got to meet Kent, but after getting to hang out with him at Cajun Cafe’s Cider and Mead Fest I knew we could make something really cool together.  It was really exciting for us to have Jared up to Ohio to work with Crafted, such a respected Meadery”.

Criminal KLP will only be available in Ohio, Florida, Indiana, Texas and Chicago.

Crafted Artisan Meadery opened in June, 2012.  Distributed in multiple states, and through their tasting room in rural Northeast Ohio, Crafted focuses on educating its customers on the history and future of Mead as well as the importance of honey bees and local ingredients.  Through consistently exploring innovative styles Crafted Artisan Meadery brings fresh, new mead experiences to their customers.