(Norwood, MA) – This Father’s Day, Castle Island Brewing will commemorate the holiday with a new beer release and a backstory that weaves three generations together through beer. This shared history involves two current Castle Island team members, their families, and a Czech pilsner release on Sunday, June 16th, giving a nod to where the story all began. 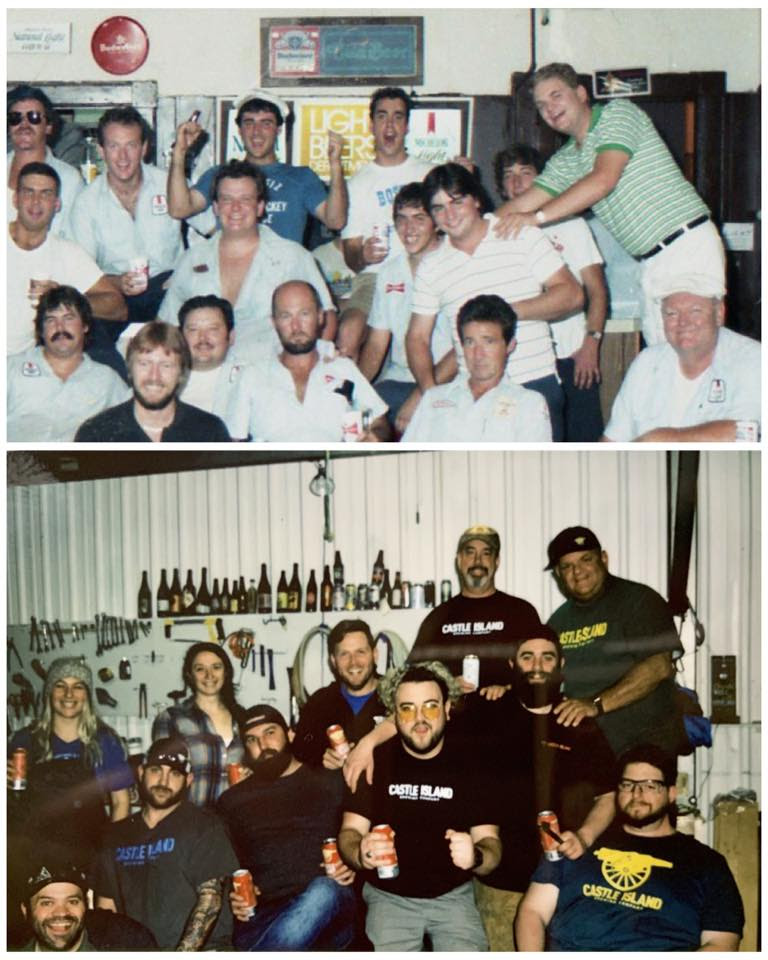 Derek Hannan, Castle Island’s Social Media Manager, and Patrick Gill, Lead Cellarman, discovered their connection accidentally after working together and becoming fast friends. Derek, one of Castle Island’s longest standing employees who has worked positions in the taproom, production, and now marketing, mentioned to Patrick that his father recommended checking out a former colleague and friend’s band, Boston’s Erin Og, that was playing a show in the area. That former colleague was Patrick’s father and they quickly realized that not only had their fathers known each other, but their grandfathers had also worked together at a Budweiser distribution warehouse.

Starting out at a facility in Brighton and then moving to Medford, where all four men overlapped and worked together, their lives became connected through the memories shared and friendships developed. Much like Castle Island’s tightknit team, the crew there was also close, and their families became close as well. This story inspired a beer collaboration that celebrates the driving force behind their paths crossing over decades and generations.

Castle Island coordinated a father-son brew day in mid-May when they flew Derek’s father up from Florida and organized a reunion between the two men. Derek’s dad, George Hannan, and Patrick’s dad, Stephen Gill, hadn’t seen one another for over 20 years. The four men brewed a pilot batch of a 4.7% ABV Czech-style pilsner, named Twisted Büdlines, as tribute to the fathers’ history together and inspiration for the collaboration.

“I’ve told the story about 100 times and it really doesn’t get old. The fact that our families have such a unique history, yet Pat and I hadn’t known each other prior to working together; coupled with how quickly we got along even before figuring out the connection – you just can’t help but think about the way people are connected.”

Twisted Büdlines is a taproom-only release, fittingly slated for Father’s Day at open. The beer will be available both on draft and in growlers to-go. The day will also feature barbeque dishes and live cooking courtesy of Ribpublic which pairs perfectly with this crisp, clean, refreshing pilsner. Follow the story on Castle Island’s Facebook page (/castleislandbeer), Instagram (@cibrewing), and Twitter (@cibrewing) accounts, and spend the holiday toasting to three generations of working in beer. More information can be found at the event page here: https://castleislandbeer.com/event/fathers-day-at-castle-island/

About Castle Island Brewing:
Castle Island is an award-winning Massachusetts brewery dedicated to crafting a party with a purpose. With a focus on American-style ales and lagers, we make offerings that are both unique and approachable. Whether you find yourself discovering Castle Island for the first time or have returned for another round, you can expect a stellar experience from the very first to the very last sip. You can find our beer throughout Massachusetts and Rhode Island in cans and on draft, as well as at our Norwood brewery and taproom.