The Bruery Unveils The Latest Share This Charity Beer

(Orange County, CA) – The Bruery’s third installment in their Share This series of imperial stouts will be released to the public starting in March. Each Share This beer is made in partnership with a charity in order to give money back to the region which inspired, or contributed to, the beer’s flavor profile. 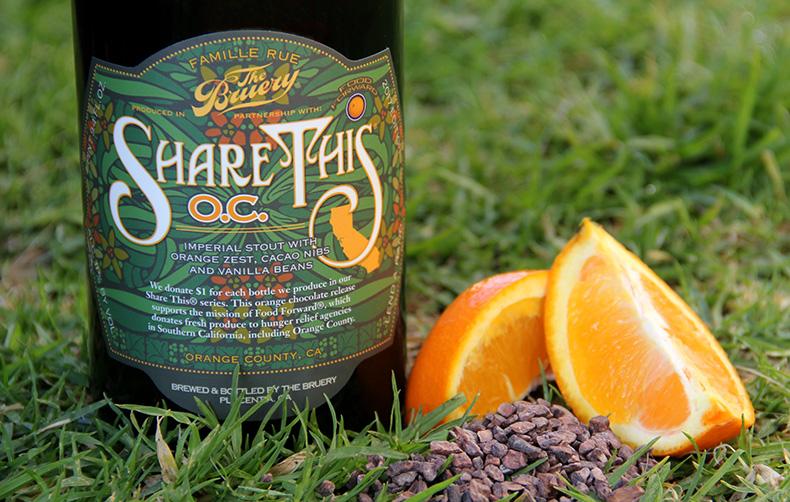 The third release in this series was inspired by The Bruery’s home county and its history as a significant growing region for oranges. It is the first time the donation will go towards efforts in the United States, with a hyperlocal focus on Food Forward’s work in Southern California. The rich, imperial stout base, already chock full of notes of chocolate and roast, is dosed with orange zest, TCHO cacao nibs, and vanilla beans, to create the orange-chocolate Share This: OC.

“It’s hard to not have an affinity for oranges when you grow up in Orange County,” shared The Bruery Founder & CEO Patrick Rue. “Oranges and chocolate are a natural pair, each flavor enhancing the other. We’re excited to bring this flavor combination to Share This, and to support Food Forward, a local charity that benefits our community by providing delicious, fresh fruit to those who might not have access to it otherwise.”

“We are thrilled to be the selected non-profit to benefit from the current release of Share This.” expressed Food Forward Founder & Executive Director, Rick Nahmias. “The ethos, practices and vibe of The Bruery is so aligned with Food Forward and our work to eradicate food waste and act as a bridge to get fresh healthy produce to over 1.25 million of our region’s most vulnerable. The generosity of this program and partnership is a huge boon to Food Forward and will allow us to continue to deepen our work to harvest food, fight hunger and build community across Southern California.”

Share This: OC can be purchased directly from The Bruery beginning March 14 at TheBrueryStore.com, The Bruery Tasting Room in Placentia, and the Bruery Terreux Tasting Room in Anaheim. Throughout the month of March, the beer will be hitting retail shelves in The Bruery’s national distribution footprint .

ABOUT THE BRUERY
Founded in 2008, The Bruery is a small, innovative craft brewery located in Orange County, CA that is family-owned and operated with CEO, Founder, and Master Cicerone® Patrick Rue at its helm. The Bruery produces barrel-aged and experimental beers, while Bruery Terreux®, launched in 2015, focuses on fermenting beer with wild yeasts and souring bacteria.