(ORANGE COUNTY, CA)  – On Friday, January 19, The Bruery Store at Union Market in Washington, D.C. will celebrate its grand opening with special in-store giveaways and experiences, with special events around town leading up to the milestone of the California-based brewery. 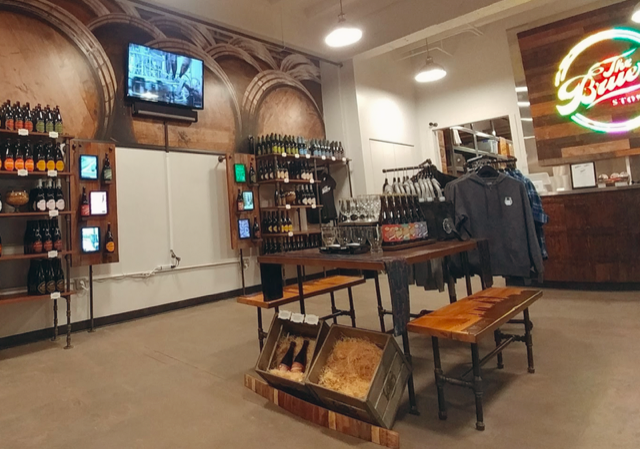 For nearly a decade, fans have travelled far and wide to get their hands on experimental and barrel-aged beers from The Bruery. The Bruery Store at Union Market is the company’s first and only location outside of California, providing Society members with the ability to pick up online purchases of exclusive beers in-store, plus onsite sales of specialty beer, merchandise and gifts for thousands of fans of independent craft beer on the East Coast.

“The concept of creating a central location for fans along the East Coast to get their hands on our beer has been several years in planning,” said founder and CEO, Patrick Rue. “But it’s more than just beer. The Bruery Store at Union Market is a marker and invitation to the community to come enjoy a more intimate experience with our brand. I couldn’t be prouder to open our doors on the East Coast and welcome new fans as we celebrate our brewery’s 10th year.”

Located in the heart of one of Washington, D.C.’s most exciting urban villages at 513 Morse St. NE, The Bruery Store at Union Market is open Tuesdays through Saturdays, from 11:00 a.m. to 8:00 p.m.

The Bruery team has several unprecedented doorbuster giveaways and sales planned for the occasion, starting at 11:00 a.m. on Friday, January 19, 2018.

The first 100 shoppers (no purchase necessary) on Jan. 19 will be gifted a limited edition, commemorative t-shirt and receive a three-bottle set of beer.

The second 100 shoppers (no purchase necessary) on Jan. 19 will be gifted two bottles of beer.

On Jan. 19, attendees who sign up to become a Preservation Society member will receive a free bottle of beer.

Current Hoarders Society, Reserve Society and Preservation Society members will receive a free bottle of beer with any purchase during opening weekend.

One lucky shopper on January 19 will win a 2018 Reserve Society membership raffle (no purchase necessary). A membership includes over $370 value in included beer and merchandise, plus access to purchase the brewery’s most limited releases – at a 15% discount – online and in-store.

A meet-and-greet with The Bruery Founder, Patrick Rue – one of just 16 individuals to earn the title of Master Cicerone®.

Visitors will be able to join the Offshoot Beer Co. Interest List and gain access to the latest fresh, juicy, hop-forward and canned releases from the offshoot of The Bruery.

Onsite bottle sales of popular and special releases from The Bruery, Bruery Terreux and Offshoot Beer Co. will be featured throughout opening week.

Future plans for the store include rotating taps for crowler/growler fills.

In conjunction with grand opening festivities in-store, several marquee events are planned around town to celebrate the increased presence of The Bruery in Washington, D.C. Events include the following:

Interested in becoming a member before the party gets underway? Spaces are available to join The Bruery Preservation Society today.

ABOUT THE BRUERY®, BRUERY TERREUX® and OFFSHOOT™ BEER CO.

The Bruery was founded in 2008 by Patrick Rue, now a Master Cicerone®, after he found homebrewing to be of greater interest than law school. Innovation has driven The Bruery to create one-of-a-kind barrel-aged, sour and experimental beers since its inception. In 2015, The Bruery moved its sour beer production to the Bruery Terreux co-brand in Anaheim, CA, while The Bruery continues to craft non-sour and spirit-barrel aged beers at its original site in Placentia, CA. Bottles from The Bruery and Bruery Terreux are distributed in nearly 30 states, including Washington, D.C. In 2017, Offshoot Beer Co. was born, specializing in hoppy beers packaged in 16-oz. cans, released in limited supply and sold directly to fans for fresh enjoyment.

The Bruery offers three different tiers of Society memberships, each with their own level of access to limited release beers, discounts on purchases, in-store perks, and access to Society-exclusive events and merchandise. Additional information is available at thebruerystore.com/membership.