(SEATTLE, WA) –  Reuben’s Brews has just added a new spring seasonal to its lineup. “Bits and Bobs” IPA will be available from January through April in cans, draft and bottles. Each spring, the beer will feature a new recipe, taking everything the brewery learned throughout the year to create a brand-new brew. For 2018, Bits and Bobs was brewed with Strata (originally X331), Azacca and Citra hops, alongside a predominantly pale malt bill with a touch of Vienna malt to provide balance. 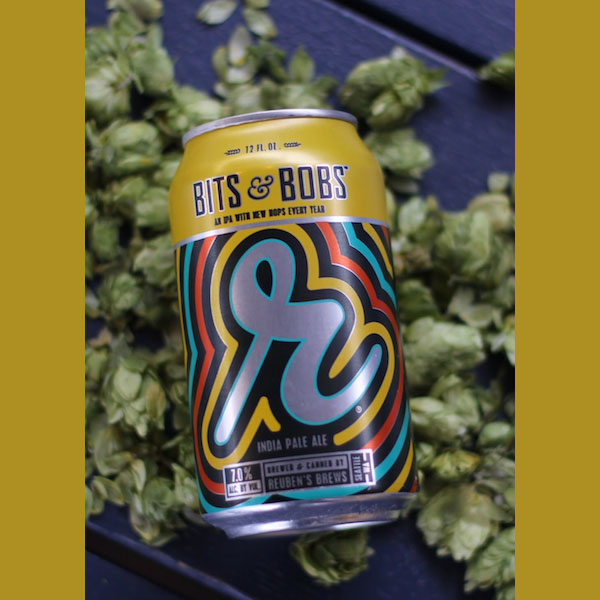 Adam Robbings, co-founder and brewmaster for Reuben’s Brews, said, “This beer is a reflection on our experiences of the prior year, such as our experimentation with different malts, hops and new processes to brew an IPA. Bits and Bobs allows us to brew something different every year, play around and have some fun.”

Bits and Bobs is wrapped in brightly colored packaging that reflects the energy and excitement Reuben’s had making it. This year’s edition is a fruity IPA, with overripe fruit notes, and a juicy body. The inaugural Bits and Bobs was created in the West Coast IPA style and uses some processes, malt and hop combinations that the brewery first used during 2017. It wraps up the sip to leave you wanting more.

Robbings said, “Brewing is a journey. We love brewing new beers, and are passionately focused on constantly improving our brewing processes. Just as I did before starting Reuben’s Brews when I was home brewing in my garage, Bits and Bobs allows us to focus on what we love.”

Reuben’s Brews will be touring the Pacific Northwest this month for the “Bits and Bobs Tour” which will include tap takeovers and tastings. See attached image for dates and location details.

About Reuben’s Brews
After the birth of their first child Reuben, Adam and Grace embarked on a mission to brew bloody good beer. Originally from the UK, Adam turned a passionate hobby into a family-run brewery crafting nationally and internationally recognized beers in a wide variety of styles. Since opening in 2012, Reuben’s has won awards for its beers around the world including at the Great American Beer Festival, the World Beer Cup, the US Open and was named Mid-Sized Brewery of the Year at the 2015 Washington Beer Awards. Find Reuben’s Brews in the Pacific Northwest and at its taproom located at 5010 14th Ave NW in Ballard, open 7 days a week. For more information, visit www.reubensbrews.com or follow on Facebook, Twitter and Instagram (@reubensbrews).