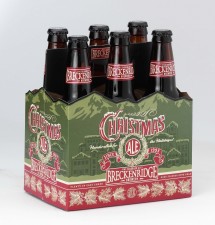 Breckenridge Brewery Announces the Return of Christmas Ale, as well as some very special beer to be released in the near future.

Denver, CO – November 11, 2010 – Breckenridge Brewery of Colorado, LLC kicks off the holiday season by releasing its popular seasonal beer, Christmas Ale, in 6-packs of 12-oz bottles.  In addition, hand-numbered and hand-labeled liter bottles of Christmas Ale will be available next week.  The brewery produces just 1200 of these liter gift bottles and expects to sell out by Thanksgiving as in years past.

In 1993, Breckenridge Brewery introduced Christmas Ale and has been brewing the same recipe for the holiday season since.  This beer is known by enthusiasts for its heartiness and rich flavors of caramel and chocolate.  Unlike many holiday and winter beers, Breckenridge Brewery does not add any spice to its Christmas Ale.  The spicy characteristics of this ale come from specially selected hops.  It’s a strong ale at 7.4% alcohol by volume, but the alcohol is not a prominent flavor after this beer’s 4-week cold conditioning.

Breckenridge Brewery celebrates its 20th anniversary this year.  The brewery was founded in 1990 in Breckenridge, Colorado.  In the past two decades Breckenridge Brewery has grown from a small 3,000-barrels-a-year brewpub to one of the most successful craft beer companies in the nation. It now handcrafts nearly 30,000 barrels of fresh beer annually and owns and operates 4 pubs in the state of Colorado.

*We close out our anniversary year with another “20th Anniversary Edition” Breckenridge Brewery beer, commemorating our humble beginnings in Breckenridge, CO, in 1990.  It will be released in December.  “Twenty” is a Stranahan’s whiskey-barrel-aged ESB packaged in 750ml bottles w/ cork & wire bale closure.

*Another small batch release on the horizon is a double chocolate cream stout, made with milk and dark chocolate from Rocky Mountain Chocolate Factory in Durango, CO.  Look for this special release in January.  A pilot batch was brewed at our Breckenridge, CO, Brew Pub, and it produced a smooth, decadent beer!

*Pandora’s Bock, our winter seasonal, will be released in January, 2011.