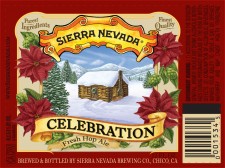 Since as long as I can remember, there have been plenty of myths surrounding the legendary Sierra Nevada Celebration Ale. Most of it is fun craft beer folk lore that has taken on a life of it’s own. I’ve heard some good ones that include: there are spices in it, they use chocolate malt in it, it’s the same recipe as Torpedo Xtra IPA, the beer can be aged for years and take on complexities,etc etc.

One of the bigger myths is that the beer is a different recipe from year to year.  I’ve bought into that one myself, as I have perceived the beer to taste different and smell different over the past 4 holiday seasons.  For the most part, it’s always been the same vibrant amber gold with the same picture perfect head, but it’s wonderful hop profile has been distinctively different year to year to my nose and tongue.

So it was time for us to bust some myths, and drop some knowledge about this craft beer holiday staple. We reached out to Bill Manley over at Sierra Nevada with the following questions about Sierra Nevada Celebration Ale, and in particular the 2010 edition. We hope you find this interesting and informative.

1. Why was the term fresh hop ale used this year?

2. It’s always speculated the beer is different from year to year. This years tastes almost like the Estate Ale. Less citrusy, less fruity than ever before. Am I correct that it changes from year to year?

In answer to your questions. We decided to put “Fresh Hop Ale” on the label this year to help clarify what Celebration is for consumers who may not have had the opportunity to try it before. Celebration  ale is, and always has been, an American IPA brewed with the first, fresh hops of the growing season (i.e. fresh hop ale.) The beer has been in production since 1981, and in its current form (recipe) since 1983. It was one of the first legitimate IPAs brewed in the “American” style and has never contained any spices; only hops, water, malt and yeast.  Despite nearly 30 years of (roughly) the same recipe, we get lots of complaints each year from people who are expecting a spiced holiday “Winter warmer” style of beer. And oddly, we also get lots of emails from people telling us how delicious the spices we used tasted…specifically nutmeg and cinnamon. As I’ve said, this has never been the case. No spices are or were used in the beer. We chose to highlight Fresh Hop Ale to clue people in on the real nature of the beer so folks know what they’re getting into.

We use a blend of Cascade, Centennial and Chinook hops to create an interesting citrus, pine and (kind of) spiced flavor, but all of the higher tones in the beer come from hops and yeast esters. The beer does change from year to year, but that is only because it relies so heavily on hop flavors, and hops can vary wildly from year to year and even from field to field.

Our Harvest Ale was really the beer that launched the wet hopped ale trend. Although some breweries use terms interchangeably, we take pride in noting the differences between wet-hops, fresh-hops and standard hops. Wet-hops being the green, un-dried hops fresh from the fields within 24 hours of picking, (used in Northern hemisphere Harvest and Estate Homegrown Ale) and Fresh Hops being fast tracked…picked, dried and shipped within 7 days of the fields. (Celebration Ale and Southern Hemisphere Harvest with hops from New Zealand.) The hops in Celebration, specifically with the first batches, can be very different than the hops used in later brews. We do our best to blend batches into a consistent flavor but as with any craft product there are definitely variation from batch to batch and from year to year. That said the recipe remains constant.