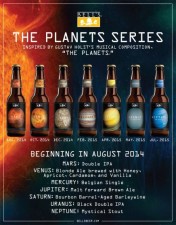 (Galesburg,MI) – In the same tradition as our Batch and Wheat Series,’ we are proud to announce The Planet Series.

It will feature seven different beers each inspired by a different piece of music from the composer Gustav Holst. Each beer will be limited and released both in six-packs and on draft according to the arrangement of Holst’s composition across all areas we distribute to.

The first Planet beer will be released this August with each successive entry debuting about every two months after. The final beer is scheduled for release in July 2015.

“Our two most successful brands come from a couple of my great literary references. This time, I took inspiration from a great piece of music,” said Larry Bell, Bell’s President and Founder.

“This piece, being in seven movements, gives us a lot of freedom to innovate and create,” he added.

Holst conceived the idea for “The Planets” in 1913 with the first complete performance occurring in 1920. Each movement of the suite is named after a different planet and its corresponding astrological character

“Venus, The Bringer of Peace” – A Blonde Ale brewed with honey, apricot, vanilla and cardamom

“Jupiter, The Bringer of Jollity” – A malt forward Brown Ale

“Saturn, The Bringer of Old Age” – A Bourbon Barrel-aged Barleywine

More information will be released as it becomes available.