(ESCONDIDO, CA) – Stone Brewing Co. has built a reputation behind aggressive, hop-forward beers brimming with bold, bitter flavors. So, it’s no surprise its latest collaboration with similarly hop-obsessed brewers from California’s Beachwood Brewing and Heretic Brewing Company is an IPA. To those who might think another IPA from these hop fanatics is expected or passé, the trio replies, “So what!” This isn’t just another IPA; the beer was crafted with Magnum and Chinook hops as well as four newly developed American-grown varieties from Washington’s Yakima Valley, making it a unique standout. Starting this week, Beachwood/Heretic/Stone Unapologetic IPA is making its way to select markets nationwide and in Puerto Rico in 22-ounce bottles and on draft. 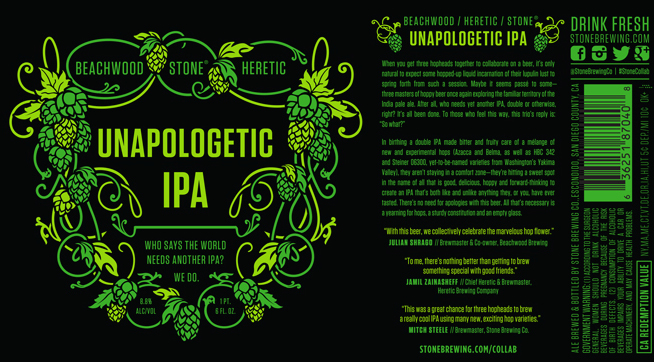 After brewing at Heretic earlier this year, Stone Brewmaster Mitch Steele invited Heretic Owner and Brewmaster Jamil Zainasheff to collaborate on a beer to be brewed at Stone. Zainasheff proposed adding Beachwood Brewmaster and Co-owner Julian Shrago to the team since they all share an affection for over-the-top hoppy beers. After very little deliberation, the collaborators couldn’t resist the opportunity to explore familiar territory and brew a double IPA.

“With Jamil and Julian’s impressive brewing backgrounds and knowledge, I was thrilled they were both onboard to collaborate and make my favorite style of beer,” said Steele. “We were planning on brewing a double IPA, and thought the addition of the experimental hops would add a unique element to the beer. With hop growers regularly working to intensify breeding techniques, it is an exciting opportunity for us to work with newly bred varieties before they are widely available.”

To experience these newly cultivated hops in all their glory, fans should consume Beachwood/Heretic/Stone Unapologetic IPA as soon as possible (and definitely before the 90-day “enjoy by” date found on the bottle neck). This beer is a magnificent example of what happens when talented IPA brewers band together and delve into a familiar style. Who says the world needs another IPA? We do.