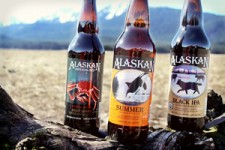 (JUNEAU, Alaska)–Alaskan Brewing Company was awarded two gold and one bronze medals in the 14th Annual Commercial Craft Brewing Competition of the West Coast Brew Fest. The awards were announced this week, and the winning beers will be poured for attendees of the Brew Fest, on Saturday, May 18, at Miller Park in Sacramento.

Alaskan Brewing Company’s Summer Ale was awarded a gold medal in the “Mixed” category. Summer Ale is a Kolsch style beer, released every year as a seasonal, and perfect for warm weather and outdoor grilling. Another seasonal, the spring-released Alaskan Black IPA, was awarded the gold medal in the “Porter/Black IPAs” category. Black IPA has come out the past two years during Alaska’s spring breakup, and combines the crispness of an IPA with the rich malted taste of a porter or stout.

Alaskan Brewing has been honored many times in the West Coast Brew Fest, including recent gold medal winners Alaskan Birch Bock and Alaskan Barley Wine. For 2013, over 150 Beers were entered in over 18 categories.

Both Black IPA and Imperial Red were seasonal or limited releases earlier this year, so they may be getting hard to find. But Alaskan Summer Ale has just been released for the summer season, and can be found throughout Alaskan Brewing’s 14 state distribution area. Finding Alaskan Beer in your area is as easy as checking the Alaskan Brew Finder.

Visit www.alaskanbeer.com to learn more and connect with Alaskan at Facebook.com/AlaskanBrewingCo and @AlaskanBrewing on Twitter.