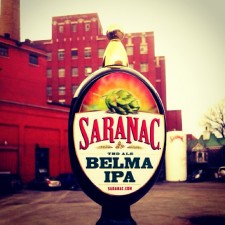 ACBW, May 13-19, is an annual weeklong opportunity for brewers to share their culture and community with craft beer lovers across the United States. More than 1,300 events marked the occasion throughout all 50 states last year.

F.X. Matt Brewing Co. has been obsessed with brewing beer since 1888 and is extending its 125th anniversary celebrations to ACBW.

“This week isn’t just about highlighting the advancements and innovations we’ve been a part of throughout the years,” said President Fred Matt. “We’re actually celebrating those customers who – like us – aren’t afraid to try something new.”

Loyal Saranac lovers can test one of the brewery’s most recent innovations, Single Hop Belma IPA, at a special happy hour from 6-8 p.m. on Friday, May 17, at the Saranac 1888 Tavern & Tour Center in Utica. Admission is $20.

Single Hop Belma IPA is the first brew served to the public from its Pilot Brewery and features Belma hops, which were found growing wild on a hop farm in the Yakima Valley region of Washington State.

“Are we excited to take this opportunity to celebrate 125 years of brewing?” Fred pondered. “Yes. When you think about the fact that the F.X. Matt Brewing Co. was crafting beer before craft beer was even cool – yeah, that’s something we’re proud of.”

Actively run by third and fourth generation Nick and Fred Matt, the family embraces the innovative philosophy instilled by their grandfather and great-grandfather, F.X. Matt I.

“As one of the first American craft breweries, we’ve always challenged ourselves to push the boundaries of brewing and twist tradition,” said CEO Nick. “You’ll find this passion come to life in each bottle with a full flavor profile for a refreshing and round experience every time.”

Some recent industry innovations the F.X. Matt Brewing Co. can brag about include:

F.X. Matt Brewing Company in Utica, N.Y., was founded in 1888. Today, under the leadership of the third and fourth generations of the Matt family, the brewery is celebrating 125 years of brewing. Through a commitment to innovation and brewing excellence, the company has earned a reputation as one of the country’s most respected brewers of craft beers, including the premium Saranac line. In each bottle of Saranac, you’ll find exceptional quality, distinctive ingredients and a refreshing twist on tradition – the signature of the F.X. Matt Brewing Company.