(Abita Springs, LA) – Louisiana’s first and largest craft brewery, Abita Brewing Company, introduces a guilt-free IPA offering to meet the demands of the evolving beer drinker – Hop 99. This Light IPA, which contains only 99 calories and 2.7 carbohydrates, will be available for purchase year-round beginning late September in all markets Abita beer is sold. 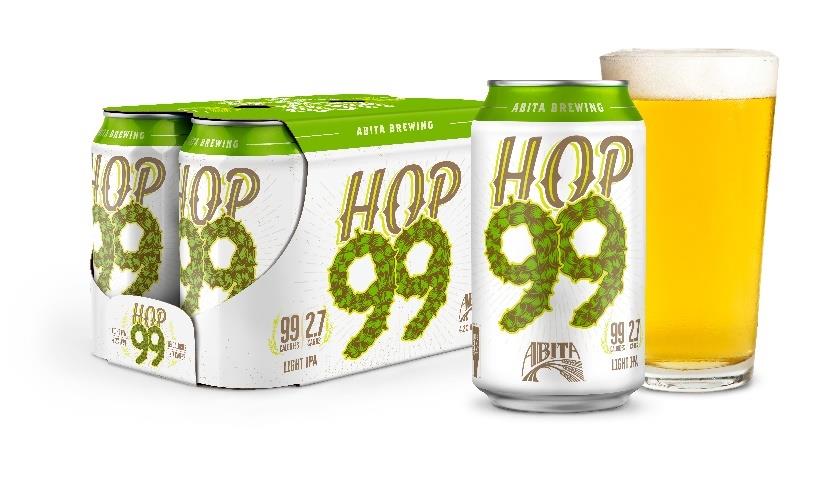 As the craft brewing industry continues to evolve, the team at Abita sought to break into a new category and brew a more sessionable beer without sacrificing the craft taste for long-time patrons and new craft beer drinkers. Hop 99 is a sessionable IPA at 4.2% ABV making it an ideal choice for after a run, taking a break from yard work or a long day of tailgating.

“Hop 99 is the result of our brewing team and our patrons evolving together,” says David Blossman, President & CEO of Abita Brewing Co. “This beer gave us the challenge to create a flavor-forward, drinkable IPA, while it gives beer drinkers a craft-forward, sessionable option that significantly cuts the amount of carbohydrates and calories normally found in an IPA, or any category for that matter.”

Hop 99 is one of the first of this emerging low-calorie, low-carbohydrate IPA style. Mosaic and Citra hops are loaded into Hop 99 to give it a big hop flavor, while pale malts give it a light body and crisp finish.

“As the IPA category continues to change, we wanted to do something different that would appeal to a broader range of beer drinkers, so we took a look at how we can make an IPA an everyday hop-forward beer,” says Abita Brewmaster Mark Wilson.

Abita Hop 99 will be available in 12-oz cans, 1⁄4 and 1⁄2 draft kegs. The Light IPA will be featured in bars, restaurants, grocery stores, liquor stores, and convenience stores among other locations across the country.

Patrons can sample Hop 99 and an array of Abita beer at the brewery’s Tap Room. Guided and self-guided brewery tours are also available throughout the week.

Nestled in the piney woods 30 miles north of New Orleans in Abita Springs, Louisiana, Abita’s state-of-the-art facility produces more than 140,000 barrels of beer and 10,000 barrels of soda per year. Made with only the finest ingredients, including the purest water directly from Abita Springs, Abita’s lagers and ales are brewed in small batches and hand-crafted by a team of dedicated workers with only the highest ideals of quality. The brewing company features 13 year-round brews, including fan favorites Abita Amber, Purple Haze, and Louisiana exclusive The Boot, a line of seasonal brews and limited series, and craft sodas. Abita Brewing ranked 21st on the Brewers Association “Top 50 U.S. Craft Brewing Companies” 2018 list. Abita Brewing Company is privately owned and operated by Louisiana shareholders, many who have been with the company since day one.