Bluesapalooza, held every August in Mammoth Lakes, CA is by far my favorite beer festival.
I’ve been going to beer festivals for 25 years now, and I guess I’ve become jaded, but I don’t look forward to them as much as I used to. For the most part, it’s hard to relax at most beer festivals-they are a ton of work, and as I get older, my tolerance for lines, crowds, and the occasional stupid drunk is rapidly diminishing. 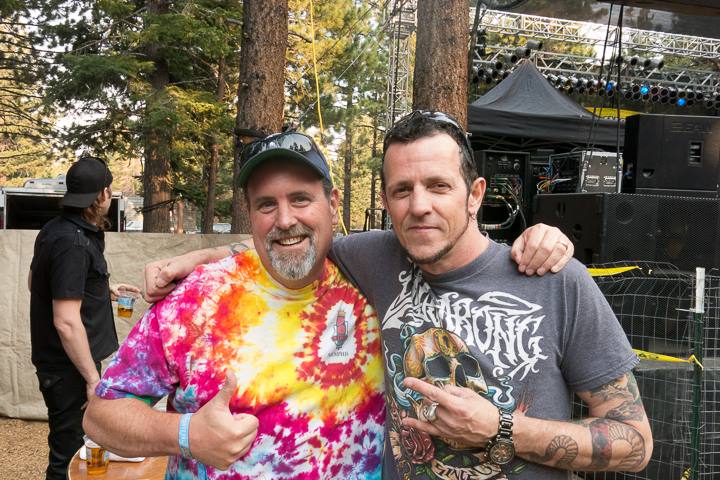 So what makes the Mammoth Bluesapalooza so special? For me, it is 3 things:

1. The fest itself is low key and amazing, with a huge turnout of actual brewers, probably second only in Southern California beer festival brewer participation to the Firestone Walker Brewers’ Fest in June. This makes it a great experience for me, I don’t see my fellow brewers as much as I’d like to, especially in a situation where we can relax and have a beer. The lines aren’t long and it’s easy to walk from booth to booth.

2. The music is incredible. The organizers have grown this festival every year, it’s now 4 days of music (4 days if you want, there are several options for attending 1 day or just a couple) and the blues artists they get are top notch. Some of my favorite artists have play here at this event.  And the other thing that makes this so nice is that when you need a break from Saturday’s beer festival, you can wander down the hill to the large natural amphitheater, sit in your lawn chair, and listen to some great blues music.

3. The setting. Nestled in a pine forest in the beautiful town of Mammoth Lakes, it is a perfect escape from the Southern California desert. Usually very comfortable temperatures, sunny skies and the scent of fresh pine everywhere.

So after a 5 year absence, this year I was able to coordinate my family and work schedules to take a couple of days off and get to the fest. Here are my top memories:

1. Gary Hoey. This guy is an amazing guitar player. Two things stand out from his show: Twice he handed his guitar to someone standing at the front of the stage, and let them jam on a tune. The first tune was a slower version of Crossroads,and the second was a slow blues number. Both players in the crowd absolutely shredded their solos, and it was fun to see Gary Hoey working the pedals on the stage while they played. Plus he did a killer version of War’s Low Rider, including his bass player’s fantastic solo. After his show, Gary hung out and signed autographs, sold CD’s and took pictures with his fans. I offered to take a friend’s picture with him, and while doing so, told him I was a New Hampshire guy, like him, which was cool-we talked about about New Hampshire, and then I got a picture with him. Super personable guy, and a great guitar player.

2. Jimmy Thackery has absolutely mastered the Fender Stratocaster. He gets an amazing array of tones from it, and he was able to play hard blues to country blues to surf, all incredibly well. He has got the chops. If you are not familiar with Jimmy Thackery, check him out. He also used to play in a blues band from the DC area called The Nighthawks. They are still around too-just a great band.

3. Tinsley Ellis has been one of my favorite guitar players since the mid 1980′s. He plays like a cross between Stevie Ray Vaughn and old school Bluesbreakers/Cream-era Eric Clapton. He played a Gibson 335 semi-hollow, and later at the end of his show, switched to a Stratocaster. And when he put the Strat behind his back and played it, like Jimi Hendrix and others used to do, the bass player, who had also switched from a Fender electric bass to a big stand-up bass, did the same thing. I have never seen that before- and he was rocking the bass while struggling to keep it elevated behind his head. At the end of the show, Tinsley brought out Jimmy Thackery for a guitar crossfire on Let The Good Times Roll. Amazing.

4. The beers: Some of my favorites from the fest that was held on Saturday from 11:00-5:00 included Ritual, Kinetic, Golden Road, The Bruery, Wiens, Ironfire, and of course Stone. All the brewers brought their “A-game” for this one. Some of my favorites included Kern’s Single Track, a dark sour from Eagle Rock Brewery, The Bruery’s Berliner-Weisse, 21A’s Back in Black, and several beers from Ritual and Ironfire. Plus there was an awesome bottle share Friday night after the brewers reception-more on that in another blog.

6. Schatt’s Bakery-right in the center of town. Seems like everyone goes there in the morning to get coffee, pastries and artisinal bread. I guess they have several stores in the area-perhaps owned by different brothers? Sheepherder’s Bread = delicious. And they make great coffee.

7. The Stone crew that set up the fest did a great job. I took some vacation days to go, so I wasn’t officially working (which probably explains why I enjoyed it so much), but these folks did a great job selecting the beers, setting to booth up, and securing a firkin of Stone IPA that was a huge hit.

8. The Alpine Fire (18,000 acres at last check) was burning close by, and smoked the area out a few times, depending on the wind and the time of day and the temperature. I learned a lot about forest fires as we monitored the progress of this one, such as how the smoke settles in the canyons in cooler temperature (making the mornings relatively smoke free). In the afternoon, as temperatures warm up, the fire starts generating wind, and changing wind patterns. The firefighters were struggling with knowing where to drop their water on the flames, because the smoke was so thick.

9. Did I mention the beers? The picture below was taken Friday evening. Carolyn Wonderland from Texas had a great set, she’s a guitar-slinger with some serious skill on both the Telecaster and a lap steel, and her vocals have some similarity to Janis Joplin.  Her keyboard player handled bass with his left hand on a keyboard, like Ray Manzarek of The Doors. Really one of my favorite acts from the weekend. Friday night’s beer offerings were all from Mammoth Brewing Co. including a wonderful IPA, and their well known 395 IPA, that is brewed with local sage.

10. The drive. I always tell my wife that the hardest thing about living in the San Diego area is that you have to drive through some real “armpits” to get anywhere else nice (and by that I mean through the desert, the central valley, or through Los Angeles). And before anyone gets offended, Los Angeles itself isn’t an armpit, but driving through it is traffic-laden hell, and something I always dread. Driving to Mammoth requires a lot of desert, 2-line highway driving, and it’s tough on the senses. Traffic is challenging, negotiating around semi’s and motor homes and trailers. But in the end it’s worth it!

I hope to be back next year!