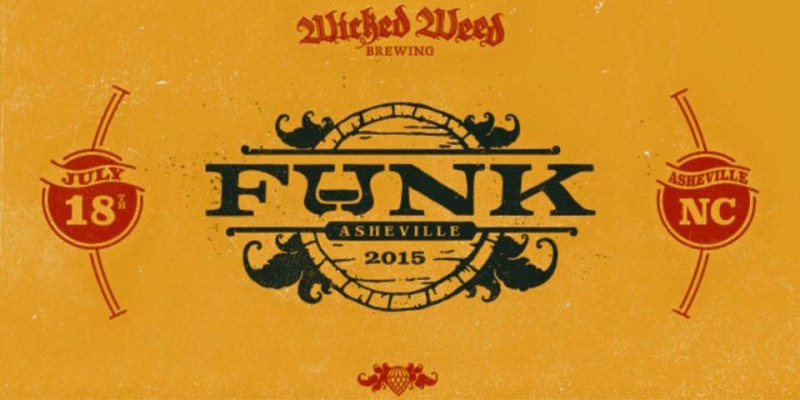 Now in its second year, Funk Asheville is a gathering of sour and wild ales from across the country featuring, both well established and up and coming breweries that are paving the sour and wild path for craft beer.

“We believe strongly in this craft and the cause it supports,” states Head Blender, Walt Dickinson. “We want to be a voice moving the conversation about sour beer forward in the Southeast. Funk Asheville’s goal is to bring breweries, who are dedicated to the craft of sour beer from all across the country into our own back yard to showcase the full potential of American barrel-aged sour and wild ales.”

Funk Asheville will commence at 7pm (with a 6pm entry for VIP) in the wooded outdoor space at Wicked Weed’s new production brewery in Candler. General admission tickets are $80 (plus fees and NC tax) and VIP tickets are $100 (plus service fees and NC tax) Purchase of VIP tickets offer early entry with no lines, a collaborative food and sour pairing from Chef Terry of Wrecking Bar and Chef Cardiff of Wicked Weed, the ability to talk one on one with brewers, and free entry into a drawing for a nine night BeerTrips.com tour to Prague, Bamberg, Cologne and Brussels.

“We’re proud to be partnering with Wicked Weed Brewing again this year on Funk Asheville,” said Rick Lyke, founder of Pints for Prostates. “We use the universal language of beer to reach men with an important health message. The funds we raise help support free men’s health screening clinics and support groups for men diagnosed with the disease.”

The famed silent auction benefiting Pints for Prostates will be conducted during the festival and feature unique beer experiences as well as highly collectable items from attending breweries. This partnership of brewery and non-profit, also in its second year, is an integral focus of the festival.

“Their work nationally has been really exceptional. They are committed to putting on great festivals based that bring awareness to, often overlooked, men’s health issues,” states Dickinson. “It was the right fit for everyone and they’ve been amazing partners to work with year after year.”

A new addition to ticket sales this year is a local VIP ticket. As a thank you to their hometown, Wicked Weed is offering 100 VIP tickets to locals at General Admission price.

“Without the embrace we felt early on from our community we wouldn’t have a sour program,” explained Dickinson. “It was the people who would show up every Friday at three o’clock waiting for us to tap Black Angel when we only had four barrels of it who drove Wicked Weed sour beer and proved that it was viable. This is a small way we can thank them.”

VIP Local tickets will go on sale May 11th-15th and can be purchased in person at the Funkatorium (147 Coxe Ave). Locals will need identification with an Asheville address and/or mail with proof of address.

Pints for Prostates reaches men through the universal language of beer to encourage them to take charge of their health. The group was founded by prostate cancer survivor and beer writer Rick Lyke in 2008. The grassroots effort raises awareness among men of the importance of prostate health screenings by making appearances at beer festivals, social networking and pro bono advertising. According to the National Cancer Institute, 233,000 American men will be diagnosed with the disease this year and 29,480 will die from prostate cancer. More information is available at www.pintsforprostates.org. Pints for Prostates also has a presence on Facebook, Instagram and Twitter (@pints4prostates).

Wicked Weed Brewing is based in Asheville, North Carolina. Opened in December 2012, the original brewpub consistently hosts 25+ beers on tap including hop forward, West Coast style ales, open fermented Belgians, and barrel-aged sour and wild beers. With the opening of the second location, The Funkatorium, in October 2013, Wicked Weed is striving to become one of the leading producer of barrel-aged beers in the Southeastern United States. Wicked Weed Brewing was awarded a gold medal for both 100% Brettanomyces Serenity in 2013 and Mompara Honey Ale in 2014 at the Great American Beer Festival. Wicked Weed is currently building a 40,000 square foot production brewery by fall 2015. Learn more at www.wickedweedbrewing.com and on Facebook at http://www.facebook.com/WickedWeedBrewing.