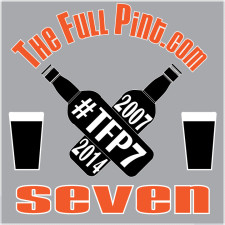 The Full Pint is turning 7, and like the past two years, we are throwing a bash like none other. We’re moving this year’s party to San Diego, and the legendary Toronado San Diego will be the host of this grand event.

Here are the details we have for you so far, consider this a live document that will be updated as more info becomes available.

What: The Full Pint 7th Anniversary Celebration Sponsored by InsideTheCellar.com, an event featuring the most tasty and rare beers under one roof.

Details: For those who did not attend the past two years, this is a very special beer event. We will be offering a VIP Session and a General Admission Session.  The VIP Session will consist of 1 commemorative glass, 8 taster tickets and 1 meal ticket. Those who don’t make it to the VIP session, the General Admission will begin at 4PM, you will pay $10 at the door for a commemorative glass, and you will be able to purchase special beers as you go.

Price: VIP Session Tickets are SOLD OUT General Admission will be $10 at the door after 4PM, people will be let into the party as room becomes available.

Designated Driver Tickets are available using the same link, for $20. If our security catches a person with a DD bracelet taking a mere sip of beer, they will be quickly removed from the party. Designated Drivers will be able to have food and soft drinks for doing their honorable duty.

Safety: We want to make sure that you not only have a great time, but also have a safe time. Please consider booking a hotel and cab ride for this event. We will be working with the folks at Toronado for a possible group rate/shuttle service hotel deal.  Also, drink lots of water before hand and during the event, and have a big breakfast.

SPECIAL HOTEL RATE: Our friends at The Hanlery Hotel have offered a special rate of $119 a night by following this link: https://www.reservations-page.com/C00180/H00189/be.ashx?pc=FullPint

If you would like to be the official sponsor of this event, and have your company’s name in the title and on the program, please email  [email protected] .

TENTATIVE  BREWERY/BEER LINEUP: We know there are so many beer festivals and parties to choose from, that’s why we work closely with our brothers and sisters in the craft beer industry in order to deliver a once in a lifetime type of experience. Here are some of the breweries we are teaming up with in order to bring you the rarest and most delicious beers we can round up.