The Brooklyn Brewery MASH Tour Kicks Off in Austin,TX 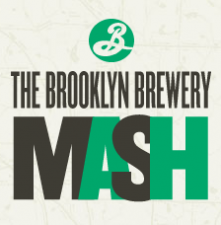 The Brooklyn Brewery Mash as a benefit for Slow Food USA. Kicking off at SxSW Interactive in Austin, The Mash will drop in 11 cities during 2013 and roll out a roster of parties, comedy, concerts, pop-up supperclubs and readings, all featuring humanity’s favorite beverage.

NYC food and art organizations have been closely linked to Brooklyn Brewery from the beginning. Be it a beer dinner, cook-off, concert or film festival, the ethos of these happenings has consistently mirrored the consideration and creativity behind the making of The Brewery’s beer. Paired with the flavor and flair of Brooklyn, classic nightlife is reimagined as a more interactive experience. During The Mash, participants will enjoy core and rare Brooklyn beers.

Helping color in The Mash, NBNY, the organizers of Brooklyn’s Bring to Light festival, will create their immersive installations of light and projection art throughout the tour. Continuing a tradition of giving back, Brooklyn Brewery cooked up The Mash as a benefit to Slow Food USA. Proceeds from every ticket sold will go to Slow Food chapters in each city.

“We’re absolutely delighted to have the support of the Brooklyn Brewery as it launches its Mash tour,” says Richard McCarthy, Executive Director of Slow Food USA. “Brooklyn Brewmaster Garrett Oliver has been a Slow Food supporter for a long time and we’re looking forward to the celebrations in the various local communities.”

Wed, Mar 6, 7pm | A stalwart citizen opens their home kitchen to strangers for a dinner party where all guests are cooks. Each attendee brings the ingredients and everyone cooks together. Dishes are passed around, and there’s plenty of Brooklyn beer to enjoy. Location is secret – go to ChaosCooking.com for details.

The Brooklyn Brewery House Chef will be cooking up some of his favorite finds from the market. And drinking beer. Stop by for a sip and a cooking tip.

Sun, Mar 10, 1–4pm; Clive Bar, 609 Davis St, Austin, TX – $15 | Austin’s top home chefs create their best smoke-themed dish ranging from savory to sweet. Some wear costumes, some pimp out their table, but all come to win over the audience and our esteemed culinary judging panel. The Food Experiments return to SxSW for the third year in a row.

Every installment of The Mash is custom tailored to the cities it visits.

Go to BrooklynBreweryMash.com for info on the rest of the tour.

Slow Food USA is part of a global movement, which believes everyone has the right to good, clean, and fair food. With over 250,000 supporters, 25,000 members and 225 chapters nationwide, Slow Food USA advocates for food and farming policy that is good for the public, good for the planet, and good for farmers and workers.

Food Republic, our media partner, explores the culture of food through stories, interviews, global conversations, and experiences. This is the site for men who want to eat and drink well, and to live smart. Food Republic aims to be the global hub for news and information about the new culture of food across a multitude of media platforms, for a vibrant community of people who put food and drink at the center of their lives.

The Vendy Awards is NYC’s premier street food showcase and an intense cook-off between the best sidewalk chefs. The Vendys is a fundraiser for the Street Vendor Project, a membership-based non-profit organization that stands up for vendors’ rights.

Found Footage Festival is a hilarious event that showcases footage from videos that were found at garage sales and thrift stores and in warehouses and dumpsters across the country.

The Mash on Tumblr: BrooklynBreweryMash.tumblr.com