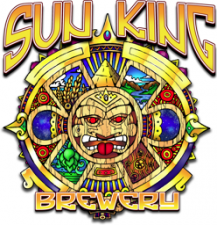 (Indianapolis, IN.) – On Monday, July 1st Sun King Brewing will unceremoniously fire up the brew kettle and celebrate our fourth birthday the same way we celebrate everyday, by doing what we love. However, on Saturday, July 6th we’re throwing a party at Sun King to share our joy and excitement with everyone featuring great, live music, Indy’s best food trucks and the release of our most anticipated seasonal beer Grapefruit Jungle I.P.A.

Grapefruit Jungle (GFJ) is a classic American I.P.A. that was devised by head brewer Dave Colt and showcases hops from the Pacific Northwest to create an intense citrus hop flavor explosion that is reminiscent of biting into a fresh Grapefruit. Every release of GFJ has sold out in record time, so this year we are doubling production and releasing it in its very own 16 oz. can, as well as on draft throughout Indiana.

“When we set out to create Sun King, we wanted to focus on continually crafting seasonal and specialty beers that complement the time of year and keep beer lovers engaged,” said Dave Colt, Sun King owner and head brewer. “It doesn’t seem like all that long ago we were working feverishly to get things in order for our first brew, but it feels like a lifetime considering the feverish pace of our growth. We are incredibly fortunate to have so much support from the people the local community!”

Sun King’s mission statement is; Enriching the lives of Hoosiers one pint at a time, and in keeping with that mission we have partnered with the Indianapolis Public Schools Education Foundation’s Teaching with Technology program and will be donating a portion of the proceeds with the goal of outfitting an entire classroom with updated technology.

The SKB IV Party is presented by Sun King and community partner MOKB Presents, who booked live music which includes nationally touring acts, Sturgill Simpson (http://sturgillsimpson.com), St. Paul & the Broken Bones (www.facebook.com/St.PaulandTheBrokenBones), and Luella and the Sun (www.luellaandthesun.com).  The musical lineup covers genres rock and roll, honkey tonk, blues, and soul to please patrons twenty-one and older.  The event would not be complete without an array of Indy food trucks, Scratchtruck, Taco Lassi, and Mac Genie.

Tickets are available now for $15 online at www.MOKBpresents.com or at Sun King Brewery for $12 at a limited amount.  The event will take place in the south parking lot of Sun King Brewery from 4:00 PM – 10:00 PM (EST).

Sun King Brewing Company is the brainchild of Dave Colt and Clay Robinson. With the help of family and friends – Omar Robinson, Andy Fagg and Steve Koers – the first keg of Sun King beer rolled out the door for delivery in July 2009. Now available on tap and in cans at hundreds of locations around central Indiana, Sun King has grown into the second-largest beer brewer in the state of Indiana. The company’s commitment to handcrafted seasonal and specialty beers has been rewarded with multiple medals at the Indiana Brewers Cup, Great American Beer Festival and World Beer Cup competitions. Visit www.sunkingbrewing.com for more information.