Special Presentation Of The New Book “Beer, Food & Flavor” This Sunday At Alesmith 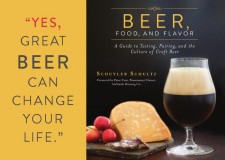 San Diego, CA – We are excited to announce a special event for our good friend and culinary director, Schuyler Schultz, whose new book, Beer, Food, and Flavor: A Guide to Tasting, Pairing, and the Culture of Craft Beer, will be making its debut in our tasting room on Sunday,October 7th from 3:00-6:00 pm.

Schuyler will be on-hand to sign copies and talk beer and food, along with our brewmaster, Peter Zien, who contributed the foreword to the book. Be the first to get a copy of this handsome and informative book before the official release date of October 17th.

There will be a variety of specially-prepared beer and food pairings on display as well as specialty beers including: Evil Dead Red, Lactic Lil’ Devil, and Lavender Lil’ Devil to mark the occasion. We may have some additional surprises for you too, as well as our full line-up of AleSmith premium microbrews.

AleSmith Brewing Company and the staff are featured prominently in the book, and we’re very proud to host what promises to be a terrific event, and the beginning of a new chapter on enjoying craft beer and food together.

The buzz surrounding Beer, Food, and Flavor is already growing.

Garrett Oliver, brewmaster of The Brooklyn Brewery, author of The Brewmaster’s Table, and editor in chief of The Oxford Companion to Beer calls the book:

“An engaging look at American craft beer through the eyes of a working chef. It’s enthusiastic, opinionated, and analytical, teasing apart the mechanics of flavor combinations and then layering on recipes, brewery stories, interviews, tasting notes, beer dinner menus, and even a useful guide to cheese. If you want to know how to bring craft beer into your culinary life, this book will take you all the way there.”

Steve Hindy, cofounder and president of The Brooklyn Brewery calls it:

“A wonderful introduction to the world of American craft beer and its place in our nation’s exciting local food movement. Schuyler Schultz brings a chef’s palate, imagination, and vocabulary to the subject in ways that will expand your appreciation and knowledge of beer’s place at the table.”