It was 20 years ago that Saint Arnold shipped its first keg of Saint Arnold Amber Ale on June 9, 1994. Today, Saint Arnold is among the 50 largest craft breweries in America and is undergoing an expansion that will nearly triple production capacity. Saint Arnold also is the oldest of more than 130 craft breweries in Texas. Saint Arnold Brewer/Founder Brock Wagner credits hard work, a focus on quality and continued passion for brewing for why they survived the difficult early years and are thriving today. 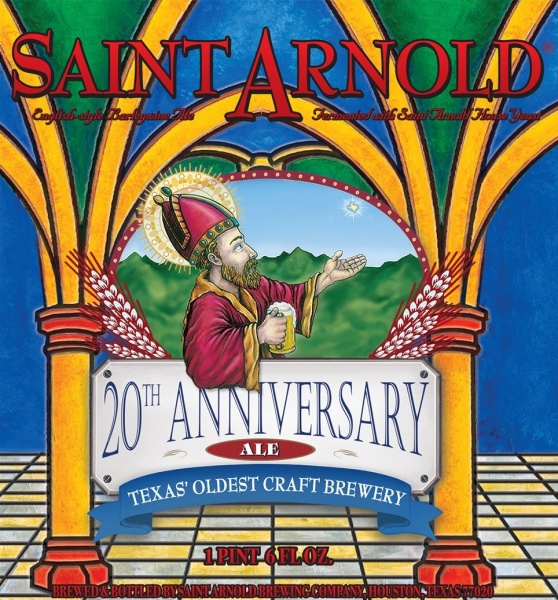 “It has been a great journey from homebrewing to our first location to working with such a dedicated team in a facility I couldn’t have dreamed of 20 years ago,” Wagner said.

The Saint Arnold 20th Anniversary Party will start at 5 p.m. on Saturday June 7, 2014. The concert, hosted by DJ Dave Wrangler, will feature performances by Hayes Carll, The Suffers, The Niceguys and Sideshow Tramps from the brewery’s loading dock.

“This is a celebration of the craft beer community throughout Texas and the 20-year journey Saint Arnold has been on to brew world-class beer and to create an institution Houston and Texas are proud of,” said Wagner.

Tickets for the Saint Arnold 20th Anniversary Party are still available at http://www.saintarnold.com/20/. Dinner from Goode Company BBQ is included.

Attendees will fill their glasses with Saint Arnold 20th Anniversary Ale, an elegant, complex barleywine that showcases the brewery’s proprietary house yeast and demonstrates Saint Arnold’s philosophy of balance. The beer’s malt bill (Maris Otter, pale two row and Munich) and Centennial, Cascade and Simcoe hops accentuate each other perfectly. Toffee and caramel flavors combine well with spice from a combination of the hops and the alcohol.

Saint Arnold’s 20th anniversary celebration will continue at 2 p.m. on Sunday, June 8th with a Special Saint Arnold Rare Cellar Tasting, which is sold out. It will feature beers the brewery set aside over the years, going as far back as Saint Arnold Divine Reserve No. 5 (2007).

About Saint Arnold Brewing Company
Saint Arnold Brewing’s 17 brews are made and sold by the company’s staff of 56 dedicated employees. Ranked 45th on the Brewers Association list of top craft breweries, Saint Arnold was listed by USA Today as one of the “10 great places to see what’s brewing in beer,” and Smart Meetings magazine named it among the “Top 5 breweries to host an event.” Saint Arnold is located at 2000 Lyons Avenue and its brewery tour and tasting is offered every weekday at 3:00 P.M. and Saturdays starting at 11 A.M. For more information on Saint Arnold’s seven year-round and five seasonal beers as well as root beer, log on to www.saintarnold.com – @SaintArnold – Facebook