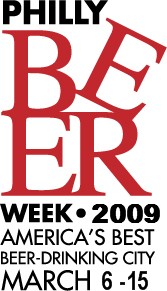 The second-annual Philly Beer Week (PBW) 2009 will kickoff on Friday, March 6 at 7 p.m., in the spectacular Comcast Center lobby and Winter Garden (17th street and JFK Boulevard) with the Opening Tap, a celebration honoring over 30 regional breweries whose beer help make Philadelphia “the best beer-drinking city in America.” The Opening Tap will begin with a ceremonial ‘first tap’ using the official Philly Beer Week Keg Mallet, followed by a strolling beer tasting and a festive awards ceremony. Opening Tap tickets cost $40 and can be purchased online at www.phillybeerweek.org ($50 at the door.)

“The Opening Tap is a one-of-a-kind event featuring our local breweries and their beers, as well as the men and women who create them,” says Don Russell, who along with Tom Peters and Bruce Nichols are the founders of Philly Beer Week.

A group of local beer writers created the awards that will honor each brewery represented at the event. An emcee will announce each award and invite the brewery representative to join them, get their photo taken and receive their PBW award.

“These are not your traditional “Best Of” awards. They have a definite Philly attitude! In this town, we may take our beer seriously, but we don’t take ourselves too seriously,” says Russell who created the awards with fellow beer writers George Hummel, Bryan Kolesar, Lew Bryson, Jack Curtin, Suzanne Woods, Rich Wagner, Woody Chandler and Carolyn Smagalski.

Food will be available for purchase from the Market at the Comcast Center, and live music is also planned. Attendees must be at least 21 years of age, and no children will be admitted.

Those wishing to take public transportation to Philly Beer Week, can purchase Sip Safely with SEPTA, an unlimited, all-day, bus-trolley-rail pass that will be sold for $9.00, valid any one day between March 6 and March 15. This pass is valid on SEPTA services, to encourage PBW participants to travel safely, rather than driving from event to event. Sip Safely with SEPTA passes are available for sale at most SEPTA locations. More information is available on the Travel section of the PBW site.

To purchase tickets for the Opening Tap or find general information including the ever-expanding schedule of events and list of participants, please visit www.phillybeerweek.org.