LOS ANGELES, CA |  – To celebrate the 4th Annual LA Beer Week (Sept 20-30), several local brewers have brewed their own commemorative beers, all incorporating one special ingredient: prickly pears! Also known by their Spanish name, tuna, prickly pears are the edible and oh-so-tasty fruit from the Opuntia genus of cactus. Prickly pears have long been used as an ingredient in brewing, especially in Mexico, where they are used to create a traditional alcoholic beverage called colonche.

Eagle Rock Brewery has once again been tapped to create the official beer of LA Beer Week, named “Unity” to pay homage to the good ol’ beer industry folk from around the city who come together every year to help brew it. This year’s iteration is a play on a traditional Berliner Weisse, a refreshing, slightly tart style of beer hailing from… you guessed it… Berlin! Jazzed up with a touch of rye and a healthy dose of red and green prickly pear, Unity will be available on draft at select retailers throughout Los Angeles and Orange County, and will of course be served at the flagship LA Beer Week Festival on Sept. 30th at historic Union Station. Unity bottles will also be available to those who complete the “LA Beer Week Bucket List.” (More details on that to come soon!) 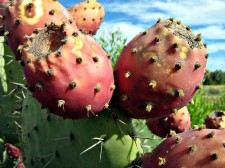 In addition to Eagle Rock’s Unity, other breweries around town were encouraged to create their own prickly pear beers especially for LA Beer Week, and several gladly stepped up to the challenge!

Beachwood BBQ & Brewing, Hangar 24 Craft Brewery, and Kinetic Brewing Co. have also taken on this most noble project, but have not yet finalized their recipes.

LA Beer Week is an annual celebration of local beer culture, taking place throughout Los Angeles & Orange Counties (and their respective environs) from September 20-30. Enlightened bars, restaurants, bottle shops, and breweries will come together to present a large number of events all around town, with focused tastings, educational seminars, and beer pairing dinners to please craft beer aficionados and neophytes alike. These resplendent activities culminate with the signature LA Beer Week Festival on September 30, from 12-4pm at the historic Union Station. $50 pre-sale tickets for the flagship festival are available now, which entitle attendees to unlimited 4oz. tasters of beer from over 70 of the world’s most respected craft and artisan breweries.

Proceeds from the LA Beer Week Festival will be benefiting The Spero Foundation, the Los Angeles Brewers Guild, and the Glassell Park Recreation Center.