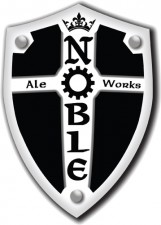 We are proud to welcome Noble Ale Works of Anaheim, CA into the LA market via their new Pasadena based distributor Artisan Ales. On this evening we will share Noble brews with the Owner Jerry Kolbly & Head Brewer Evan Price. Come experience fine, hand crafted brews and learn about this amazing young brewery from the folks in charge.

This evening we will feature on tap:

A little something about the amazing Evan Price:
Like most professional brewers, Evan Price began his career brewing right at home. What began as his 21 year old “Euro Trip” turned into a pub crawl through England, Ireland, Belgium, Germany, and the Czech Republic, and ultimately inspired him to begin experimenting with home brewing.

After many failed attempts to duplicate the classic beer styles of Europe in his kitchen, he went to work for BJ’s Brewhouse as an Assistant Brewer. Evan spent the next two years working the Laguna Hills, Brea, and West Covina locations with BJ’s. An opportunity then arose for Evan to become the first salaried employee and a Brewer at Redlands’ Hangar 24 Craft Brewery. He took the job, and there he continued to learn and grow with the company for a year and a half.

In 2009, Evan accepted the Head Brewer position at TAPS Fish House & Brewery. Working under Brewmaster Victor Novak, he learned the fundamentals of those classic European beer styles that he tried so hard to replicate during the early years in his kitchen. In the meantime, the TAPS brewing team took home Brewpub Group of the Year at the Great American Beer Festival in both 2010 and 2011.

In 2012, after years of hard work and growth, Evan has found his “home” in Anaheim, California as the Head Brewer for Noble Ale Works. You can look forward to the continued development of the existing beer line up along with the addition of experimental beer styles to the Noble portfolio.