San Diego, CA – So Modern Times Beer thought it would be fun to do something super special for the folks attending our 2nd Anniversary Party. That special thing is this: we’re releasing two one-of-a-kind bottlings of Barrel-Aged Monsters’ Park. 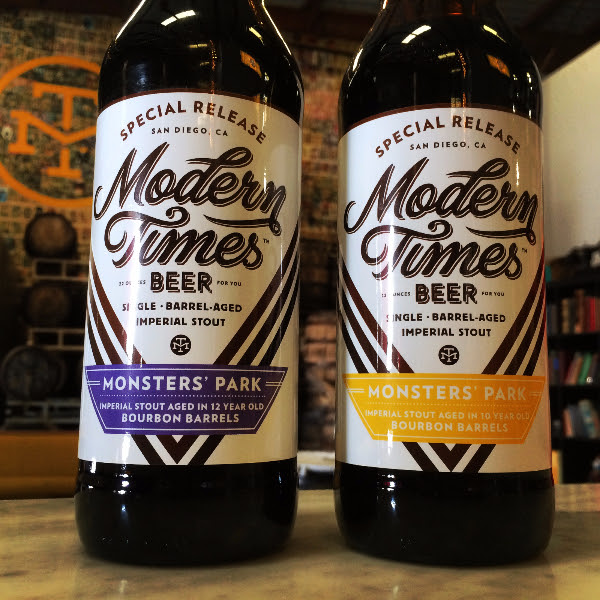 YOU CAN GET YOUR TICKETS TO THE ANNIVERSARY PARTY HERE.

Here’s the story: a certain highly-lauded wine, beer, & spirits store with locations in Los Angeles & the Bay Area that the Wall Street Journal once described as having “the best wine website in the U.S.” (we’re prevented from mentioning them by name due to ABC rules) hooked us up with some extremely special used bourbon barrels. These barrels contained 10-year old Four Roses & 12-year old Single Barrel Elijah Craig, both of which were personally selected by their spirits buyers for exclusive house bottlings.

When we received these barrels, we were all blown away by how incredible they smelled. We promptly filled them with Monsters’ Park and time did the rest. Unlike most of our barrel-aged releases, which receive 6 months of aging time, these got to spend a luxurious 9 months mellowing and meshing with the barrel.

The results are sublimely delicious. The Four Roses/10-Year Old Bourbon displays a pronounced rye spiciness along with big notes of burnt sugar, sweet cinnamon, and rich chocolate. The Elijah Craig/12-Year Old Bourbon edition is loaded with classic bourbon traits: caramel, floral vanilla, oak spice, and toasted bread. Fun fact: Elijah Craig Single Barrel has been discontinued, so these are some of the last barrels to ever come out of the program.

We will have 336 bottles of the 10-Year Old Bourbon and 155 bottles of the 12-Year Old Bourbon available for sale, spread across all sessions of the 2nd Anniversary Party; they will be $28 & $30 each respectively. Regrettably, there are fewer bottles than there are tickets available for the party, so not everyone will be able to get them. They will be available at the merch booth at the start of each session.

In the event that you are unable to attend the party or miss out on bottles, some will also be available through the retailer that provided us the barrels.

YOU CAN GET YOUR TICKETS TO THE ANNIVERSARY PARTY HERE.