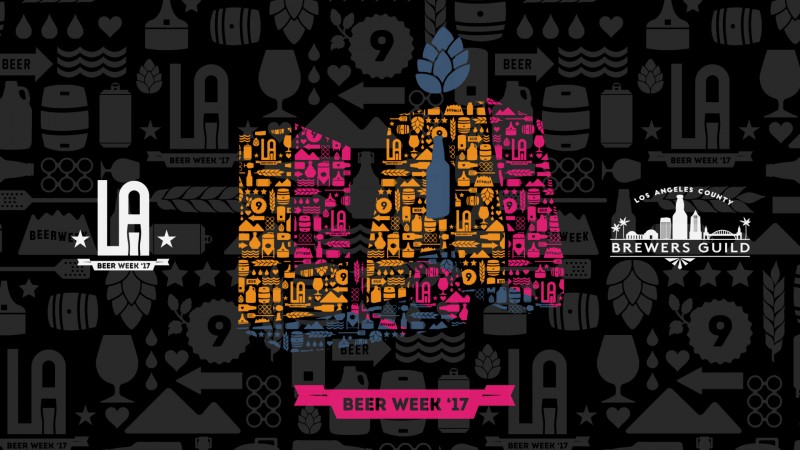 Media Release
The 9th Annual L.A. Beer Week will take place June 17-25 and will commence with the L.A. Beer Week Kickoff Festival presented by the Los Angeles County Brewers Guild. The flagship opening marks the Guild’s fourth year producing the event since the nonprofit inherited the brand from L.A. Beer Week’s founders in 2014. The 90 brewery lineup will feature a record-high number of L.A. brewers in addition to its invitational list featuring both longtime fan-favorites like Firestone Walker and The Lost Abbey plus exciting newcomers including Brewery Rex (Tyler King formerly of The Bruery), The Rare Barrel, and Green Cheek Beer Co. (Evan Price formerly of Noble Ale Works).

In addition to the Kickoff’s 180+ beer list, guests will enjoy a newly expanded food court area featuring even more of the city’s favorite food trucks plus a new VIP lounge and outdoor deck. Fest-goers will have no shortage of entertainment from the various pub games on site and live music from beer week regulars The Firkins and the return of the L.A. Brewers Unity Band; a supergroup spearheaded by Eagle Rock Brewery’s Jeremy Raub that features some of the region’s best brewing and musical talent. A photo booth sponsored by Snap Yourself returns for guests to capture summer memories.

Beyond the Kickoff Festival, organizers anticipate dozens of beercentric events to hit the week’s calendar including Pink Boots Society Takes Over Three Weavers on June 19, Eagle Rock Brewery’s Battle of the Bands on June 20, and the L.A. edition of Battle of the Guilds presented by L.A., San Diego, and San Francisco Brewers Guilds on June 21 at Naja’s Place.

Venturing into the Santa Clarita Valley, the 3rd Annual BFE Fest presented by Wolf Creek Brewery returns as a celebration of L.A. County’s perimeter breweries located outside of the city centers of L.A. Over 20 L.A. County Brewers Guild breweries will pop-up at the Valencia brewery on Friday, June 23 to spread awareness of independent craft beer in L.A. and fund raise for the Guild.

Sierra Nevada’s Beer Camp on Tour will close out the power-packed week in Long Beach, CA on Saturday, June 24. The blockbuster event will be co-presented by the L.A. County Brewers Guild and will bring over 100 breweries into the Queen Mary Waterfront Park. The event will feature special guests including many of this year’s Beer Camp Around the World collaborators and specialty rare beer tappings personally selected by the Grossman family.

*Full-Disclosure: This release was posted by Frances Lopez, the Executive Director of the L.A. County Brewers Guild and longtime staffer at The Full Pint. The Full Pint is an active Media Sponsor of L.A. Beer Week. *