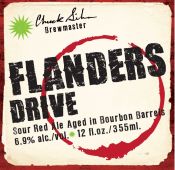 Join us during San Diego Beer Week for the release of our 10th Anniversary Ale –  Flanders Drive, a Sour Red Ale.
Tickets for this event are extremely limited and all attendees will receive:

I had been working on a very specific barrel aged beer concept for a couple years when Green Flash found its new home on Mira Mesa Blvd and Flanders Drive and I thought to myself out loud, ”How fortuitous?”  The barrel aged beer that I had been researching and developing was Flanders-style Red Ale so I instantly thought to name this new beer after our new cross street, Flanders Drive (Sour Red Ale).  The making of the beer uses brewers yeast, brettanomyces and lactic acid producing bacteria (lactobacillus & pediococcus) adding tartness to the malty sweet base that includes Munich Malt and Special B for a good malt backbone.  We’ve been waiting for over a year for the beer to develop in oak barrels as the sourness increased and the wood added more depth and complexity.  The beer is brownish-red with off-white beer foam.  Aromas and flavors of sour cherries and dark fruit abound with subtle malt richness in the background for a full and rewarding sour ale.  This very limited, rare beer is an extra special treat from Green Flash to commemorate 10 years of innovative brewing in the San Diego community.  6.9% ABV, 24 IBU