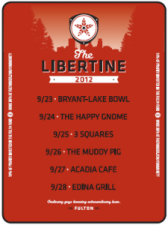 Minneapolis, MN – We’re all about honoring the passage of the seasons here at Fulton, so we’ve decided to commemorate the onset of autumn by releasing our fall seasonal, The Libertine, this Saturday. To kick things off, we’re holding a “Libertine 2012 Release Tour”, which will start Saturday at our taproom, followed by a stop at each of the Original Six bars to carry Fulton. Here are the tour dates.

The Libertine Release Tour schedule is packed, but we know not everyone who wants a Libertine will be able to make an event. Many other bars & restaurants will be serving Libertine as well, so ask around. Also, we’ll be doing a very limited run of 750 mL (wine bottle size) bottles for our liquor store friends this year. We’ll have more information about the mid-October release of those bottles as the date gets closer.