Firestone Walker hosted their inaugural Invitational Beer Festival at the Paso Robles Event Center this weekend featuring over 40 premium craft brewers and local restaurants curated by FW Brewmaster Matt Brynildson. Easily one of the hottest tickets of the (almost) summer – if not the year, the Firestone Walker Invitational Beer Festival was an incredibly organized event with solid vendors, brewers, and live entertainment in a unique local setting. Considering the fact that tickets sold out within three hours of the event’s pre-sale, it’s apparent that over the years, Firestone Walker has become a major fixture in the California craft beer scene.

Hosted in partnership with the Paso Robles Pioneer Day Committee, the Invitational drew a crowd of over 2,400 attendees with proceeds benefitting Pioneer Day; a beloved Paso Robles community celebration dating back to 1931. We were very eager to taste out way through this well-curated list of breweries alongside light bites from some of the best food the county had to offer (including one of my personal favorites, Full of Life Flatbread).

The event was held from 1-6 p.m. and by 11a.m. there was already a large crowd of general admission ticketholders in line around the fairgrounds. Each attendee was given a commemorative taster-sized snifter glass and a set of plastic utensils and bamboo tasting plates to reduce waste impact. Beer stations were scattered throughout the grounds with food vendors placed between every few breweries. This was a great idea, as it helped break up large crowds into multiple lines. Despite being completely sold out, the entire event was planned perfectly; with reasonable lines, ample food samplings, and no shortage of water stations and restroom facilities. There was also ample seating and shade located within the grandstands and food pavillion areas, which helped shield many on this particularly sunny day.

The first thing on our drinking agenda this weekend was to try all of the non-California breweries that were invited to the event. Utilizing some of our time at the festival before gates were officially open, we made a b-line to the booths which we thought would get the largest crowds (since they are not available for distribution in California). First up was 3Floyds for their highly-coveted Dark Lord (w/ Vanilla Bean) and their Zombie Dust pale ale. We then moved on over to the neighboring Founders, Bell’s, and Nebraska Brewing booths before making our way over to Southern Tier, Mikkeller, Dogfish Head, and Sun King. Once gates were opened and the crowd began to flood in, we started to make our way through the rest of the festival; making sure to try as many of the rare specialty beers on the list including the beautiful 18 year Elijah Craig Barrel-Aged Eclipse from FiftyFifty.

A few breweries had some special tricks up their sleeves that weren’t originally announced in the lineup such as a few brews from The Bruery including their incredibly popular Black Tuesday and FiftyFifty’s anniversary barleywine Annularity. Throughout the day, live music from Hayburner, One Time Spaceman, and headliners The Mother Hips rocked the Frontier Stage.

Attendees were treated to special Behind the Beer sessions presented by Taphunter and The Brewing Network. Among the brewers featured were Matt Brynildson (Firestone Walker), Tyson Arp (Nebraska Brewing), Kyle Smith (Kern River), Julian Shrago (Beachwood Brewing & BBQ), Tony Lawrence (Boneyard),Meg Gil & John Carpenter (Golden Road), Gary Nicholas (Bell’s), and Mikkel Borg Bjergsø (Mikkeller). Sarah Forstner from the non-profit Save the Cocks was also featured. At the conclusion of the Behind the Beer sessions, Taphunter Co-Founder and CEO announced the winner of the first Firestone Walker Invitational Beer Festival’s People’s Choice Award as determined by over 600 user-generated votes on CraftBeerCrawl.com. This year’s award was given to 3Floyds Brewing from Indiana with Lincoln Anderson coming up to the stage to accept the award.

Overall, many were in agreement that the inaugural Firestone Walker Invitational Beer Event was one of the best beer festivals we have seen. While there were only minor details that could have been worked on (such as more meals for purchase and vegetarian options), the event went without a hitch with manageable crowds and plenty of quality beer to go around. Mark your calendars for next year, this will be a can’t-miss event. 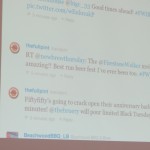 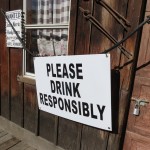