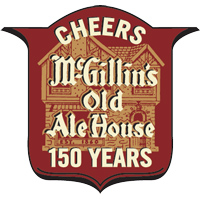 If you happen to make it there on St. Patrick’s Day… Get ready for the city’s oldest and best St. Patrick’s Day celebration on Wednesday, March 17! Doors open at 9 a.m. and the party will go non-stop until 2 a.m. — that’s 17 hours of partying!

As it warms up for the biggest party of the year, McGillin’s is serving O’Reilly’s Stout from Sly Fox in Phoenixville and as well as O’Hara’s Stout and O’Hara’s Irish Red,  direct from Ireland. The menu features hearty Irish dishes including Bangers & Mash (Irish sausage and mashed potatoes), Shepherd’s Pie, Irish Lamb Stew and Corned Beef with Cabbage.
The celebration continues during Philadelphia’s St. Patrick’s Day Parade on Sunday, March 14. The second St. Patrick’s Day Parade in the nation is held on Broad Street – just steps away from McGillin’s. On Sunday, March 14, McGillin’s will open at 11 a.m. with green beer, Irish pub menu, Irish music and more. Parade goers can warm up by McGillin’s roaring fire and sip a Chocolate Leprechaun,  Irish Coffee or McGillin’s 1860 IPA. And pub crawlers are invited to add a stop at McGillin’s this month.

On St. Patrick’s Day, Wednesday, March 17, the massive doors of McGillin’s will swing open at 9 a.m. The taps will be flowing with authentic Irish stout and green beer for 17 hours of non-stop partying. There is no better place to be Irish for a day! $2 cover.

McGillin’s Olde Ale House opened in 1860, the year Lincoln was elected president. It is celebrating its 150th anniversary, in 2010, with a the introduction of its own beer and a series of special events. The tavern that opened around the time the Liberty Bell cracked and long before anyone ever tasted a cheesesteak, is a stone’s throw from City Hall, the Pennsylvania Convention Center, Loews Philadelphia Hotel, the Philadelphia Marriott, Courtyard by Marriott, The Ritz-Carlton and other Center City hotels. A private upstairs room for 90 plus guests is available for beer tastings, bus groups, fundraisers, and more. Tavern hours: Mondays through Saturdays from 11:00 a.m. – 2:00 a.m. Sundays 11 a.m. – midnight.