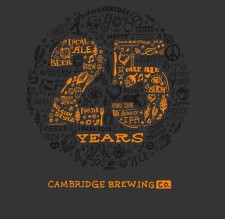 Cambridge, MA –  This month is just flying by! Cambridge Brewing hopes you’ve had a chance to enjoy the warm spring days. We’re all very busy here getting ready for our 25th Anniversary celebration. It’s hard to believe it’s only a week away.

Cambridge Brewing Co. Anniversary Weekend is May 2nd and 3rd!

Will’s been spending a lot of time in the barrel cellar and checking in on his hidden beer troves. Meanwhile Chef Dave’s been contacting local farms seeing what they’ve got for the first of the season crops. I think his biggest triumph has been sourcing the pig for the Saturday Pig Roast.

I’m pleased to announce with this email that I have the food menus (see below) for the weekend available now to share as well as a few teaser brews you’ll be likely to see next weekend.

An abbreviated list of Anniversary beers I was made privy to included previous anniversary beers, Shadows and Light and Sgt. Pepper, from our 24th and 20th Anniversaries respectively. We’ll see the ever elusive Benevolence as well as the even more elusive Honey Badger.

On top of all that goodness, we’ll have live music both nights. Jimmy Ryan & Hayride play Friday night. The Matt Berlin Trio will play the patio at 5pm on Saturday followed by Vapours of Morphine at 10pm inside.

On Saturday we’ll host the final judging round of our Homebrew Competition for Charity at 12pm and will feature a day long pig roast to be ready at 5pm.

We’ll have 25 beer taps pouring all weekend long with an evolving tap list that could top 40 beers total. We’ll have our patio beer garden and grill going starting at 5pm on Friday and going strong all day Saturday. We’re not taking reservations, tickets aren’t required and there’s no cover at the door.

So, join us at 5pm on Friday May 2nd and all day on Saturday May 3rd and enjoy a weekend of great beer, great food and great people!