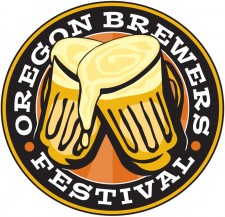 Portland, OR – A recently completed study estimates the economic impact of the 2011 Oregon Brewers Festival (OBF) on the Multnomah County local economy at $23.2 million.

Jeff Dense, Professor of Political Science at Eastern Oregon University, and his Politics and Beer class administered 628 on-site interviews at the 2011 event, July 28-30 at Tom McCall Waterfront Park in Portland.

“The study highlights the economic impact of the Oregon Brewers Festival, and Portland’s role as one of the premier beer tourism’s destinations in the United States,” Dense said.

Respondents were queried on demographic factors, along with estimates of OBF-related expenditures in tourism-related categories, including transportation, lodging, meals, gasoline purchases, non-beer related recreation, beer purchased to take home, and expenditures at the OBF.

Findings of the study include:

This year marks the 25th annual Oregon Brewers Festival, which will take place July 26 through July 29 at Tom McCall Waterfront Park in downtown Portland. Event hours are Noon to 9 p.m. Thursday through Saturday, and Noon to 7 p.m. Sunday. Nearly 80,000 fans will travel from points around the world to sample from more than 120 beers at the annual event.

The Oregon Brewers Festival was founded in 1988 as an opportunity to expose the public to microbrews at a time when the craft brewing industry was just getting off the ground. Today, that industry has flourished, especially in Oregon, which has 107 brewing companies operating 139 brewing facilities in 55 cities. Portland alone has 48 breweries – more than any other city in the world. For more information about the Oregon Brewers Festival, visit www.oregonbrewfest.com – @oregonbrewfest – Facebook