Turn Your Chicago Vacation into the Ultimate Beercation

Chicago is one heck of a boozy city, there’s no doubt about it. But that isn’t much of a surprise, considering the city’s roots run deep in German and Irish ancestry. It’s a city built on hopes, and dreams—and loose liquor laws. Even Chicago’s main source of transportation, the Metra, allows booze on the train after 7 pm or all day on specific dates during “festival season” which pretty much runs from March to late August… With loads of summertime sunshine, and about a billion-and-one things to do, Chicago is an excellent place to visit this time of year. Take our word for it and check out these tips to turn your Chicago vacation into the ultimate beercation. 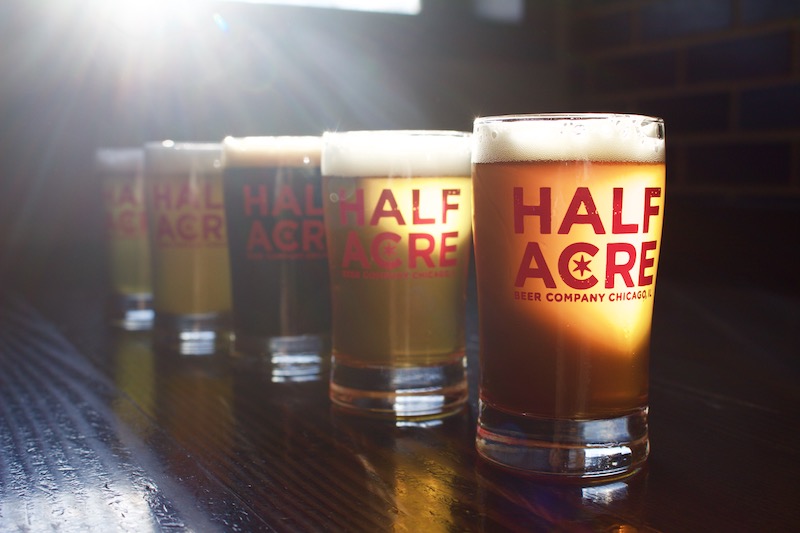 With a Heineken-controlled Lagunitas brewery and AB-InBev’s golden child, Goose Island, taking up real estate in Chicago, the city’s craft beer scene often gets a bad rap. But don’t be fooled. There’s still plenty of quality, delicious independent craft beer flowing through the city. Add these stellar breweries to your list of places to visit while beercationing in the Windy City.

The Half Acre Beer Company is growing, which is good for everyone because in addition to a production brewery on the north side of town, Half Acre also operates a brewhouse, tap room and kitchen in the charming Lincoln neighborhood—which is serving up fresh pints of the much-loved citrusy, easy-drinking Daisy Cutter Pale Ale along with ridiculously good nachos topped with “science cheese” and pickled carrots, red onions, and jalapeños. Half Acre’s tap room is a short cab ride from downtown and a great place to post up with a laptop, should you need to “get some work done” while you’re traveling. halfacrebeer.com

Revolution Brewing’s bold approach to craft beer landed them at the number 46 spot on the Brewers Association’s Top 50 Breweries of 2016. Along with six canned core beer offerings, Revolution is also brewing up six beers each year as part of their League of Heroes series—because everyone needs to be saved by a great beer now and then. In addition to the popular League of Heroes series, and the Deep Woods barrel-aged series, this Chicago brewery also cans two high gravity whoppers—the 1ZEnuff Imperial IPA that weighs in at 11 percent ABV, and the Unsessionable Imperial IPA—a 10 percenter made with a flavorful punch of Centennial, Chinook, Amarillo, and Galaxy hops. revbrew.com

Celebrating 20 years in the beer business, Two Brothers Brewing’s current motto is “you can buy our beer, but you can’t buy our brewery,” so rest assured that you won’t need to modify your plans when you add this stop to your list of places to visit. For the full Two Brothers package, head the tap house for a hearty Italian Beef sandwich, a pint of the brewery’s anniversary brew— theTwenty-Plus Pilsner Lager made with German and Czech hops—and if it’s Saturday afternoon, a free brewery tour. twobrothersbrewing.com

One of the new kids on the block, Forbidden Root is a self-proclaimed botanical brewery that opened it’s doors in the city’s West Town in early 2016. Inspired by nature, Forbidden Root’s line-up of brews include the recently-released Money on My Rind Wheat Ale made with juniper and grapefruit, a balanced Fernetic Imperial Black Ale brewed with a crazy list of ingredients including: rhubarb root, peppermint, saffron, wormwood and star anise, and the Smoochie Boochies, a fruity, hazy unfiltered Double IPA that rings in at 8 percent ABV. Pair one of their earthy beers with a tasty dish from the brunch menu, lunch menu, or all-day menu which is served until 10 pm. forbiddenroot.com

In 2016, the legendary Hopleaf Bar earned one of Michelin’s prestigious Bib Gourmand awards, which are given to restaurants offering “exceptional good food at moderate prices.” Add in a two-page rotating beer menu featuring the best of the best from breweries like Jolly Pumpkin, Allagash, Blackberry Farms, Perennial and more, and this place is a must-visit while exploring Chicago. hopleafbar.com

Keep the craft beer flowing throughout your trip by booking a room at the Fairmount Hotel in downtown Chicago. This luxury hotel is the home of Columbus Tap—a tap house offering a midwestern-focused food menu that highlights seasonal ingredients, and a beer list that showcases the crème de la crème of local craft beer. Choose from one of 16 different taps which include two nitro taps, and explore the local and regional beer scene without ever leaving your hotel. fairmont.com/chicago/

It’s not a trip to Chicago in the summertime without catching a game at Wrigley Field—especially now that the lovable Cubbies are the reigning World Series champions. Inside of the park, you’re more likely to find tall boys of Old Style than you are a quality craft beer, but the Wrigleyville neighborhood is home to a handful of surprisingly excellent bars that boast the perfect blend of dive bar and killer craft beer bar. If you plan on catching a game, start your day with a tour of the historic field that includes a stroll throughout Wrigley and ends on the field—I repeat—ends standing on Wrigley Field. Game day tours are $25 per person and start at 9 am, which means you’ll have a few hours to explore the eccentric, booze-filled neighborhood that is Wrigleyville. Located just beyond the deep right center field wall, Murphy’s Bleachers sports bar has been a game day institution for more than 80 years. While this beer joint has a charming dive bar feel, it has 11 beers on draft, which often includes a rotating seasonal from the infamous 3 Floyd’s Brewing Company, which is located roughly an hour outside of the city. murphysbleachers.com. Slightly off the beaten path, but still within stumbling distance of Wrigley Field, is Guthries Tavern—a funky, homey joint that offers 75 craft beers on draft from a slew of the best breweries in the country, like Sierra Nevada, Stone Brewing Co. Founders, Desthil and more. This craft beer mecca always has draft and bottle specials up for grab, and serves a straight-forward bar food menu that will keep you honest while hydrating yourself with craft beer all day. guthriestavern.com

Combine those stereotypical travel must-do’s in town into one fun day from the seat of a bike. Bobby’s Bike Hike is a guide company offering up a wide selection of guided tours of the city, but if you’re looking to sip on some craft beer along the way, check out the Bikes, Bites & Brews Tour. From the seat of a bicycle, over the course of four hours, you’ll cruise through the city, munching on deep dish pizza, Chicago-style hot dogs, and sipping on local craft brews. Plus you’ll ride past a lot of the city’s touristy destinations, and if you’re lucky, end along the shores of Lake Michigan, where you can snap that perfect “Wish You Were Here” shot to smear in the faces of all of your social media friends. Pricing starts at $60.50 per person. bobbysbikehike.com