It was an overcast Tuesday afternoon when I bellied up to the bar at Fiction Beer Company and nonchalantly asked for a taste of the Making a Tape, rosé sour ale brewed with blackberry and cherry. It was good, but I had to ask, albeit a bit sheepishly, for what I had really come for.

There was a momentary, internal panic that large, burly men might come bursting out, asking me to relinquish my craft beer drinking card. That didn’t happen of course (the bartender didn’t blink an eye), but I wasn’t sure what would happen when I ordered a beer that’s been hailed as the “spring trend” and has been much cheered—and maligned—by beer drinkers across the country. 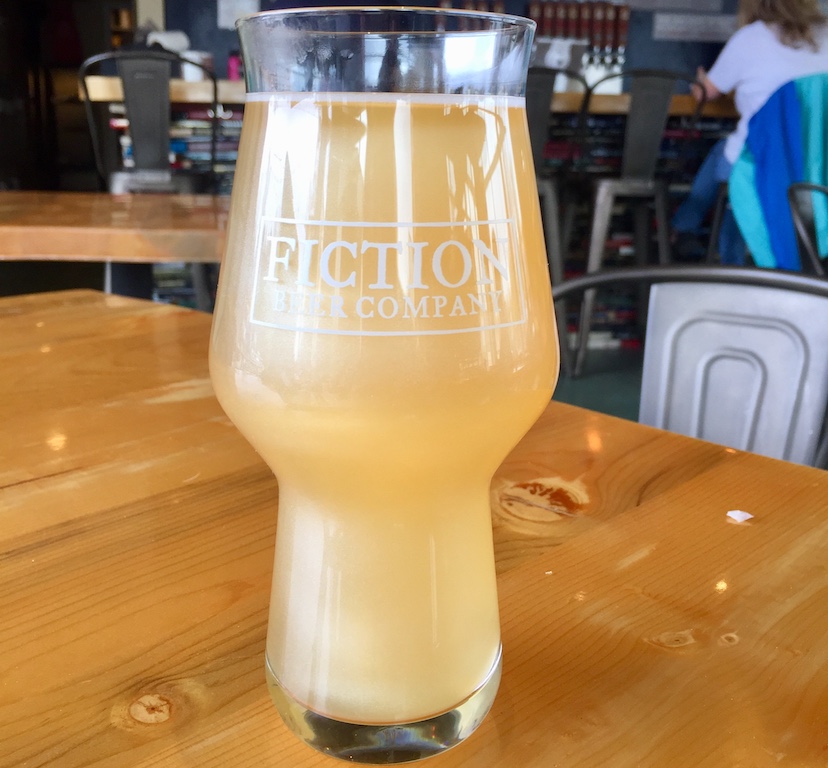 Glitter beer is not really new: There have been versions that have popped up in the past for special occasions and one-off batches before disappearing like their unicorn counterparts. But now creations swirling with edible glitter can be found in breweries from California to the Carolinas, including my home state of Colorado.

At Fiction, head brewer Brittany Portman decided to add glitter to the brewery’s gose, Waves and Ripples. The resulting Dragon’s Energy, a light and bright citrus version that weighs in at a drinkable 4% ABV seems perfectly suited for patio sitting, letting the sun shine in on the magical concoction. The beer (extra points if you get the name reference from a certain celebrity tweeting about the POTUS) debuted on Friday, April 27. The first keg was kicked in 24 hours; the brewery is predicting that Dragon’s Energy will be spent by Thursday May 3.

“The reaction has been more positive than negative,” Portman said. “Ryan and Christa (Kilpatrick), the owners, and the brewing team in general, there was some skepticism in doing a glitter beer. I thought it would be so fun and so great…but there are people who dislike it with a passion.”

Portman said that she has heard comments ranging from “good luck to your kidneys” to “those beers are disgusting.”

Fact: The glitter added to the beer is edible and is made specifically for food and beverages. That luster dust that you see on cupcakes, cookies, etc.? Yeah. Same stuff. And for the record, it won’t make your poop sparkly (sorry).

“We dose it the correct amount, so it doesn’t affect anything,” Portman said. “The flavor (of the beer) is still there and the carbonation.”

Perhaps that’s the biggest complaint that I’ve heard and read when discussing glitter beer, particularly with guys. If it doesn’t add anything to the beer, then why would you do it? After hearing this from two different men at a different brewery, they also added, “but then again, I haven’t tried it.”

But there’s another, underlying current to the glitter craze. The word feminist has been thrown around in regard to glitter beer. True, it’s mostly female brewers who are creating the sparkly stuff, but does brewing a glitter beer make you a feminist? Does drinking it?

“I think it could be construed as punk feminist, considering many who are spearheading this modification are women,” explained Jonathan Hagans in a Facebook comment on a thread I created about this subject. “Female brewers, while a growing segment of the professional brewing landscape are the minority. Combine that with a take on beer that is apparently divisive, brand new, and utilizes a traditionally feminine aesthetic, and you have what may be a feminist beer. I think really to add a stance to a beverage, you have to look at intent. At the very least it is a conversation starter and turns a product that up until recently (at least in the US) had been prototypically masculine on its head by only adjusting the visuals.”

Yeah. What he said.

For Portman, and probably most of the folks who choose to sample the beautiful brew, it’s more about trying something different.

“I just think it’s fun,” Portman said. “Beer is not a serious thing.”

No, most beer is not really serious. But the people who drink it — we certainly can be.

Want to see glitter beer in all of its glory or perhaps find a pint near you? Check out #glitterbeer on Instagram; the videos are particularly fun.

NEIPAs To Seek Out From Every State In New England Part 2 Big Beer Wants Uniformity, Not Unity