Arrow Lodge Brewing received a Cease & Desist (C&D) from Major League Baseball for their Clayton Kerhop beer that was based on the Dodgers’ Clayton Kershaw. This follows on the heels of the C&D Knee Deep Brewing received from Sony for their Breaking Bad themed beer Breaking Bud. Between breweries fighting with each other, such as Stone Brewing and MillerCoors, or non-brewing companies sending C&D orders for beer labels they view as infringing on their copyright, as in the cases above, Intellectual Property (IP) is becoming a hot topic in the brewing industry, and potentially a dangerous and expensive one if things go poorly for a brewery. 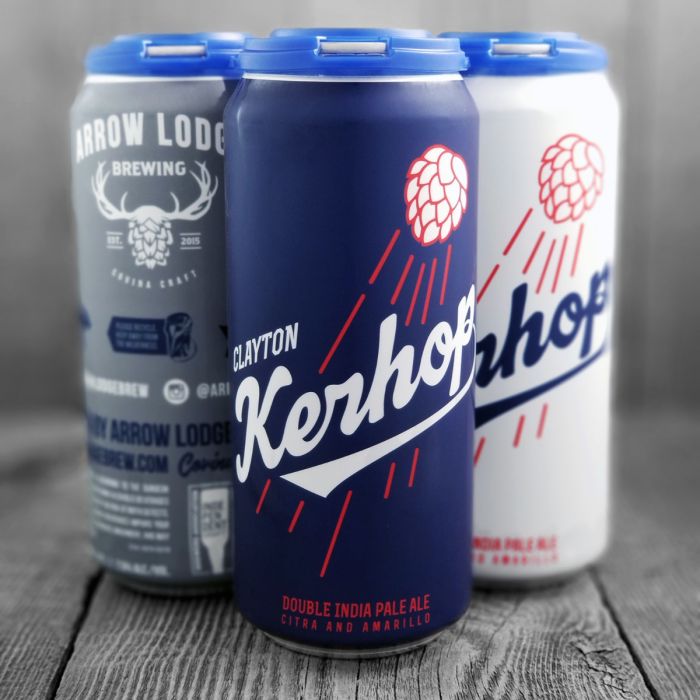 The Full Pint reached out to Victor Linares, owner of Los Angeles County based Arrow Lodge Brewing to get his candid take on the situation: “Obviously, I can’t get into too much detail since we’re just getting into it now. But we think we have a strong case against them (MLB), it just depends on how far we want to take it.”

But what is that case? First, let’s look at some basic terms that pertain to copyrights and copyright infringement. The Copyright Alliance gives a succinct description:

Copyright infringement is determined without regard to the intent or the state of mind of the infringer. In other words, it makes no difference whether the infringer knew what they were doing constituted infringement.

What about that “is permitted by an exception” portion? That’s the nebulous gray world that many of these label creators are trying to live in, so let’s examine the fair use and parody exception to copyright infringement. Parody is protected as free speech. There’s no better example than singer and songwriter Weird Al who has made an entire career of parodying popular music. The key to his parodies is that they aren’t simply using the copyrighted material of other creators to make his own song. To be parody, the songs in our Weird Al example must reflect back on the original work by either commenting on it or criticizing it. Weird Al is also famous for seeking the permission of the original artists.

That’s one thing that Victor also tries to do: “With our 3 Wheel Motion beer, we got the permission of the owner of the low rider and worked out a deal with the photographer who owned the image. We try to get the blessing whenever we can.” Another instance is their Ghosthaze Killah beer which was made in homage to the Wu-Tang Clan’s Ghostface Killah.

Many of the breweries who are using IP as part of their labeling and marketing programs claim their works fit into the “parody” clause of the fair use exceptions of copyright law. However, while this sounds reasonably clear cut, copyright law is rarely so clean or clear, and results vary drastically from case to case and even from region to region within the US judicial system. For a summation of various copyright cases, the American Bar Association provides a succinct look at a wide variety of cases that might be a helpful guide to any brewery concerned or interested in their own IP or any IP they may wish to explore. 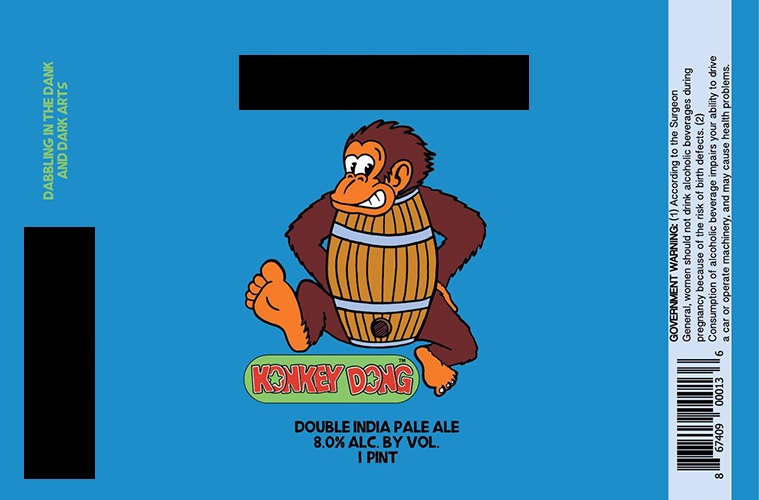 Going back to our Weird Al example and how his songs function as criticism and/or commentary on the original works leads us into another gray area where a “parody” label may fail to meet the court’s mark for legal “fair use” parody. This is one the key areas that is, in many cases, ignored in the “parody” defense. How is Konkey Dong commenting on the classic Nintendo video game property of Donkey Kong? Not only is the imagery a clear reference to the the monkey and the barrels he threw, but the letter jumble applied to the name adds a sexual tone to the image that is ramped up by placing the barrel’s bunghole, usually in the middle, right over where the genitals would be. Would this stand up in court? What criticism is the brewery launching at the famed pixelated monkey? 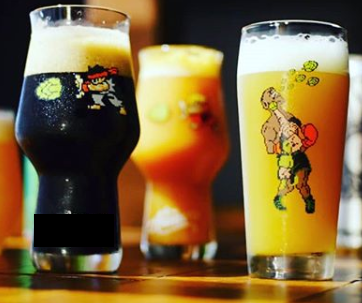 If you’re not into video games, there’s plenty of other nostalgia to seek out. You can drink a beer featuring the biggest blockbuster movies like Star Wars or, ironically enough, its parody counterpart, Mel Brooks’ Space Balls. And if that Mel Brooks parody isn’t your taste, you can sip from a beer that uses the imagery from one of Brooks’ finest works of satire: Blazing Saddles.

And while a beer might not be a direct commercially competitive property like a video game or movie, what about using the imagery of another famous product in the beverage category? La Fizz was a grapefruit infused session beer released as a one off item. It’s packaging was nearly identical to the now iconic grapefruit flavored sparkling water made by La Croix. Copyright becomes even more problematic if the branding could confuse consumers, including minors.

This isn’t the only example of borrowing the imagery and names of non-alcoholic beverages directed towards the younger set. I remember walking to the corner 7-11 when I was a teen to get a Slurpee and play some video games. Now, you can buy a line of canned beverages that use the Slurpee imagery and name recognition to brand their beer. They changed the name to Slurpy in an attempt to avoid confusion, but to add juvenility to unlicensed imagery, you may wish to avoid looking up slurpy on Urban Dictionary.

All of these examples, if called out, would be classified as “parody” by their creators, but would that actually hold water? While there’s no clear cut definition of parody, even in law it’s often nebulous and left up to a case by case interpretation, the signifier of parody, as mentioned above, is that it comments on or criticizes the original work. A telling example is the case of Dr. Seuss Enterprises v. ComicMix. ComicMix released a book called “Oh, The Places You’ll Boldly Go” playing off the the Seuss book “Oh, The Places You’ll Go.”

ComicMix’s book melded Seussian imagery with the imagery & characters of Star Trek. They claimed, even before they launched the book or dealt with the subsequent lawsuit, that their book was a work of parody. The courts, however, decided otherwise. The Copyright Alliance notes this as one of the main takeaways: “A parody may use the original work so long as it ‘reasonably could be perceived’ as commenting or criticizing the original work. Using the original only ‘as a means of conveying’ the new work is not within a parody.” You can read the full description of the case here.

That’s truly where the dangerous part of this equation lies: the cost to litigate your case. There’s a fair chance that a brewery taken to court by a large company will successfully defend their parody, but at what cost? The best case scenario is a brewery wins their case and doesn’t have to pay the financial penalty, but they still have to pay their lawyers for all the time it took to defend what may have been a one-off beer. Many small breweries are operating on a shoestring budget and may not be able to go head to head with a multinational corporation’s legal department. For them, the risk may not be worth the rewards.

“We certainly know the risk,” says Victor. “At the same time, we want to enjoy [the beer business]. I want to show off the beers of our amazing brewer, Amy Heller. It’s my job to think of ways to get people to try her beer. We’re having fun with it. We may get our hands smacked…but we have an amazing attorney. We don’t want to peg ourselves into a corner that that’s all we do. We try to stay dynamic and nimble. Going through this process [the C&D]  is educating us. It may change things in the future.”

As more breweries use pop culture references to help sell their beers, some of these efforts are going to run afoul of the associated copyright holder. Whether the brewery truly believes its label is authentic parody or they were just trying to pull a fast one, the potential legal fees associated with litigating a case or multiple cases may serve to slow the release of these nostalgic pop culture driven labels, especially if several don’t go in the favor of the breweries being targeted. If you’re willing to take the chance, your brewery can swim in dangerous waters for as long as your legal wallet will keep you afloat.

Christopher Barnes is a seventeen year veteran of the beer industry and has contributed The Full Pint, All About Beer, Belgian Beer & Food, and more. He lives in Portland, OR when he’s not traveling to the classic beer countries of Europe. You can find him on Twitter or his personal site I Think About Beer.