Oh Beer, Where Is Thy Nip?

How many of you remember the nip bottle? Back in the 90s, it was fairly common to see strong beers – we called a 7% barleywine a ‘strong’ beer’ back then – in a single serving bottle of about 7 ounces. It was called a nip bottle, as in “I’ll just have a little nip.” These were different in character than the 7 oz. “pony” bottles of beers like Rolling Rock and Miller Lite, and the cutely named Coronitas. 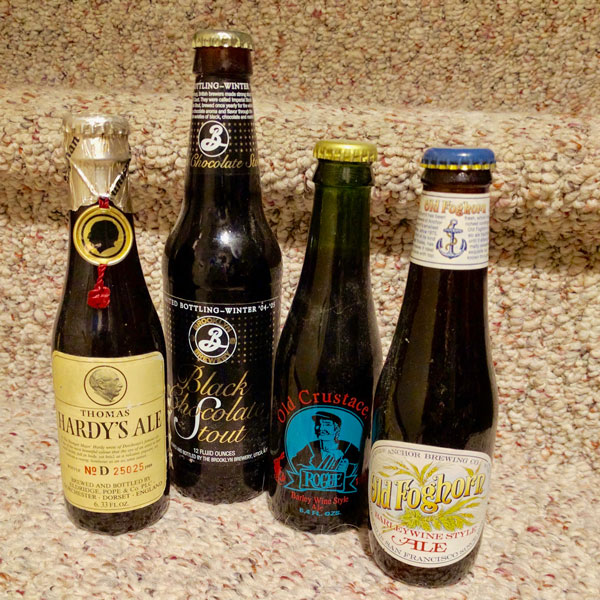 Anchor Old Foghorn was one of the first, and one of the first craft-brewed “big” beers, a malty cushion of head-thumping. There were nips of Rogue Old Crustacean. We used to collect those and age them, for good reason; I remember opening a fresh one with a group of very experienced tasters, and we all just kept taking a small sip and passing it, and trying to scrape the film of hop resin off our tongues before it came round again.

There were British nips as well, including the well-known Thomas Hardy’s Ale, the strong ale that defined that category for many of us. This was a beer that could age for years and years, and we usually didn’t touch it until it was at least four years old and the oxidation had rounded off the edges a bit.

I’m still holding onto my last nip bottle of Courage Russian Imperial Stout from 1991; the bottle is battered and worn about the base, clearly a returnable. That was a richly flavored stygian ichor that splashed slowly in a glass, almost as if it were in its own gravity field.

Then there was a novelty beer, called Roger and Out, brewed from extract at the Frog and Parrot pub in Sheffield, England in the late 1980s and 1990s. A friend brought a nip bottle back to the States, with what looked like a hand-printed label bearing a boastfully bantering warning of how strong the beer was; and it was, with a claimed strength of 16.9% ABV. It was heavy, thick, and sweet, but undeniably warming.

The common theme is clear: these small serving bottles were all for beers that were deliberately made to be consumed in small amounts. They may have been exceptionally strong, or hoppy/bitter, or rich, or simply heavy and massively flavorful.

The small bottle of beers like that was enough…or at least it was for most of us. But there was a vocal minority who wanted more beer, stronger beer, bigger beer – stop me if this sounds really familiar… – and they didn’t like the nips. They were too small! These guys wanted full-sized bottles of these big beers, ignoring the simple fact that if they really wanted more, they could just open two and pour them into a glass together. Whether it was their ranting, or a changing market, or just the costs of having a filling line that could handle another size of bottle, nips largely went away by the early 2000s.

They didn’t all go away. Some English nips are still available, and Rogue bottled their XS series (Imperial Stout, Smoke, Old Crusty, McRogue) in nips as recently as 2009 (until they ran out of supply on the bottles).

I think that’s a shame. We’ve seen so many right-sized options in packaging as craft beer has matured and developed lately: the sixtel keg, the 32/64/128 oz. growler options, the new crowler cans, and bottle sizes up to three liter magnums. Is there no room for a friendly little bottle like the nip? Something you can easily slip into a Christmas stocking, or a jacket pocket, or a purse; something that gives you just the right amount of something big? I’d like that option, and I can’t help but think there are others who’d like that opportunity as well. If nothing else, rare beers bottled in nips would potentially give even more people a chance to get in on the fun, or to age some/drink some with smaller consequences.

Maybe other people are thinking that way. The nip has seen a slight resurgence lately. Two breweries, San Francisco-based 21st Amendment and Indianapolis’s Flat12 Bierwerks recently put big beers in small packages…but they used cans. 21st Amendment put their Lower De Boom barleywine, at 11.5%, into attractively tall and slim gold-tone 8.4 oz. cans. As they put it, “More than that and you might feel like the boom has been lowered on you.” Flat12 put their 10.5% Pinko Russian Imperial stout in a squat 8 oz. can, since it’s a beer that’s usually served in smaller glasses on draft.

That’s the kind of thinking that may bring back the nip. You know what else will? Asking for it. So Santa? I’d like to see some nip bottles in my stocking. And if you can’t get it together that quickly, I’ll settle for next year. How about it, brewers: some big beers in little bottles, something we can all have some fun with. Bring back the nip!

Where to Find Good Beer on Your Holiday Layover Editorial – HopSlam or HypeSlam?